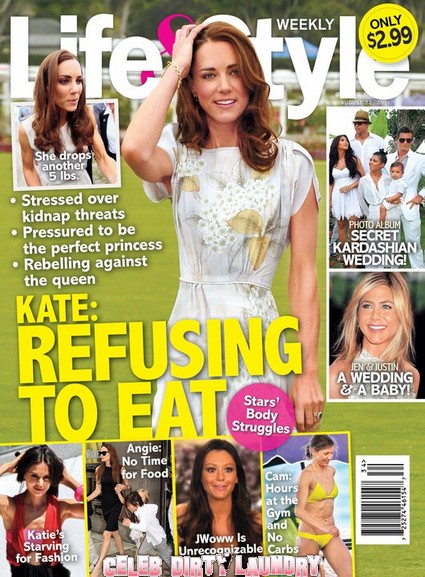 In the August 22nd issue of Life & Style magazine they feature the Duchess of Cambridge Kate Middleton refusing to eat.   The magazine claims that Kate is facing the same pressure as Hollywood starlets and that she is starving herself to look thin.  This is really not anything new the tabloids have been speculating this for weeks now.  Rumor had it Kate was anorexic and they were worried she was suffering from all the pressure of being in the public eye.

The magazine claims: “Isolated five hours away from friends and family in London, Kate is under immense stress–from safety and kidnapping threats, to constantly being critiqued by the queen, to the couple’s very public desire to start a family, and worrying over William‘s safety as a search-and-rescue pilot. “She dropped two dress sizes before the wedding and loved how it made her feel,” explains an insider. “She’s showing no signs of slowing down now, and the weight is just falling off of her.”

The magazine goes on to say her sister Pippa is worried and she calls her several times a day because she has recently lost five more pounds.  Oh and Life & Style has one of those insiders I am trying to find who told them: “William is concerned.  He doesn’t want to see Kate get sick.”

The magazine may want to contact Globe because they are claiming she had a miscarriage this week.  They may want to get on the same page.  If the tabloids are so worried about Kate getting thinner perhaps they should stop printing ridiculous stories like this!  Just saying…..

Also in the magazine they claim they have details on Jennifer Aniston and Justin Theroux’s wedding and baby.