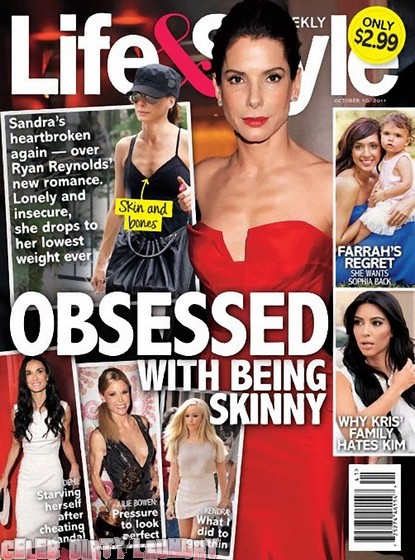 According to the October 10th issue of Life & Style Magazine, Sandra Bullock is obsessed with being skinny!

The tabloid is still trying to perpetuate the rumors that Sandra had a steamy romance with hottie Ryan Reynolds, but we’ve never heard confirmation. Still, they’re claiming that Sandra is shrinking in size because of her heartbreak over Ryan finding a new romance.

This brings us to ask: If you were dating/talking to/hooking up with/meeting Ryan Reynolds, wouldn’t you tell the world about it? He’s hot and while they’ve been friends for years, wouldn’t it be feasible to assume that she would be at least admitting something? Anything?

They’re claiming that Sandra has dropped to her lowest weight ever and is now “skin and bones”. While depression could surely be the culprit, we don’t believe that she and Ryan ever had anything except for a close friendship.

What do you think? Is Sandra too skinny? Sound off in the comments below and let us know what you think!

P.S. We love the red dress that she’s wearing on the cover.