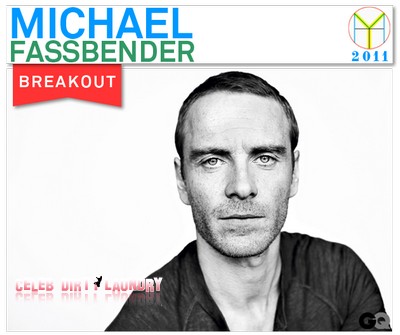 That GQ magazine just keeps on getting it right!  After crowning Mila Kunis as Knockout of the Year, fans of Michael Fassbender will be happy to hear that GQ has announced him Man of the Year.

I can certainly see why – the Irish-German deliciousness first caught my attention in Quentin Tarantino’s Inglorious Basterds, in which his acting skills blew my mind.

With films like X-Men: First Class under his belt and a busy schedule taking him all the way through to 2014, we will sure be seeing a lot more of him.  He will also soon be seen in A Dangerous Mind, which examines the intense relationship between Carl Jung and Sigmund Freud who gave birth to psychoanalysis.  After just visiting the Sigmund Freud Museum in Vienna and to have been lucky to see actual pictures of the two during their friendship, I’m very much looking forward to seeing this.

Michael told GQ magazine how he chooses his scripts:

He seems to be doing something right.  The GQ issue featuring Michael hits stands November 17th.