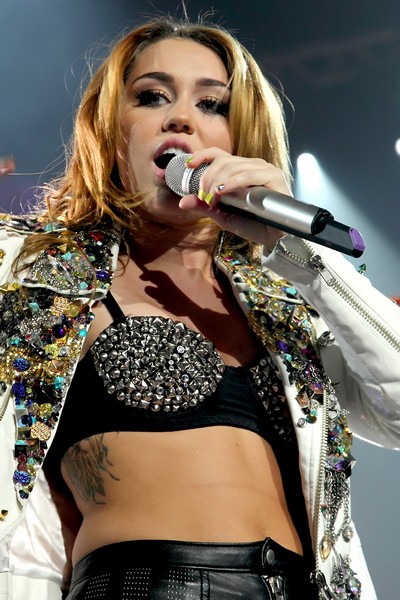 Miley Cyrus has a marijuana problem. Whether she is a ‘stoner’ and a ‘pothead’ as she herself claimed at her birthday bash, or whether she was just being sarcastic and joking around when she said it, Miley is now embroiled in a scandal which impacts upon her career negatively. The only way out of this mess for Miley is to take a drug test and make the results public. Prove that you are not a stoner Miley – we dare you!

We know that being seen as a marijuana smoker is not the image Miley wants to portray since her rep came out yesterday and said: “The cake was a joke and Miley was being sarcastic. It is being completely taken out of context.”

The trouble started when Miley was presented with a Bob Marley birthday cake by her friend Kelly Osbourne at her birthday party held at Beacher’s Madhouse inside the Roosevelt Hotel in Los Angeles on Tuesday.

Video footage showed Miley saying: ‘You know you’re a stoner when your friends make you a Bob Marley cake,’ the former Disney starlet said in a video obtained by The Daily. ‘You know you smoke way too much f**king weed!’  Kelly responded to Miley’s comments by laughing, ‘I thought salvia was your problem!’

In a reargaurd action Kelly Osbourne took to Twitter to explain the ‘joke.’  She wrote: ‘Let me make something very clear after @MileyCyrus salvia incident we started calling her Bob Miley as a JOKE! The cake was also A JOKE.’

‘It makes me sick that @Miley Cyrus so called ‘friends’ would sell her out and lead people 2 believe she is someone that she is not!  ‘U guys if @MileyCyrus is not recording/filming/touring she is works everyday how could she possible do all that if she was a stoner! #think.’

Nobody really believes what Kelly has to say now – nor do they take at face value the denial of Miley’s rep. Let Miley come forth and take a drug test and make the results public if she wants people to believe she is NOT a stoner. Otherwise she better get used to being seen as a big-time marijuana user.