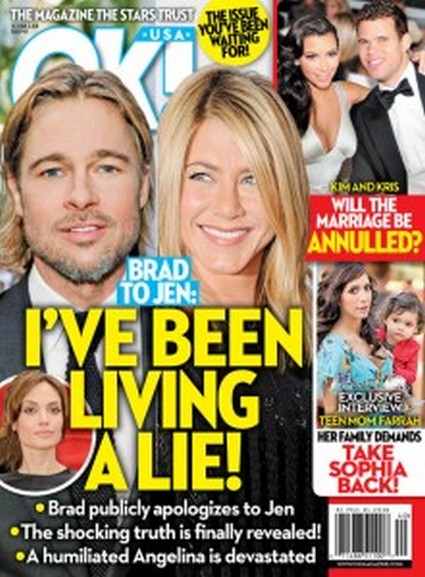 The October 3rd, 2011 issue of OK! Magazine features the cover story “Brad to Jen: I’ve Been Living A Lie”.  No big stretch why we have this headline on the magazine.  Last week Brad Pitt gave an interview to Parade magazine and in the interview he dropped some comments about Jennifer Aniston and how is life was pretty dull with her.  He said: “I think that my marriage [to Jennifer] had something to do with it — trying to pretend the marriage was something it wasn’t.”

The internet was ablaze with the story and Brad even released a statement clarifying his remarks the next day.  The magazine is claiming that the remarks that Brad made are not a mistake that Brad made them because he is upset seeing Jennifer and her new boyfriend Justin Theroux together.

OK! Magazine has more from a friend of Jen  “Brad’s got a real competitive, vicious streak, and I wouldn’t be surprised if he’s jealous. Justin is everything Brad couldn’t be. He adores Jen; Jen is deeply in love with Justin. And she’d fallen in and out of love with Brad during their marriage.  Truth be told, they were both bored. Jen saw Brad as a dull stoner. But Justin is a poet and an author and well-educated and amazing.”

“She was angry and confused. But then it became obvious to her — and everyone else in their world — that he’s just envious of how happy she is with her new man.”

The magazine goes on to claim that Angelina Jolie is humiliated about the fact that Brad felt the need to clarify his statements.  My guess is Angelina could care less, after all she is the one who has Brad.

This week’s magazine also includes Kim Kardashian and Kris Humphries and whether their marriage is already in trouble.  If you need to find out all this and more pick up a copy of OK! Magazine which hits stands tomorrrow!