Paris Hilton Sees Dire Poverty And It Touches Her Heart 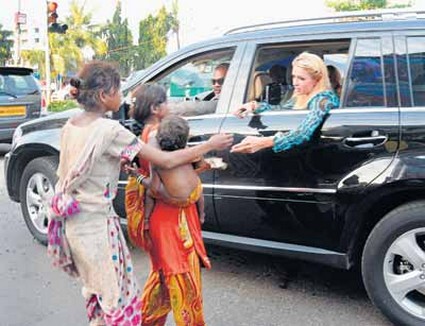 It is difficult for many of us to imagine the degree of poverty that is faced by the poor in many countries outside of the West. No less so for Paris Hilton as she got to witness the plight of the street people and street families as she was driven about Mumbai, India, earlier today. Paris is in India to launch her fashion brand where she has been welcomed warmly.

Paris spotted a beggar woman with a baby in her arms when her car was driving through the Andheri neighborhood of Mumbai. She asked the driver to slow down and handed over a US $100 bill to the poor woman – this is enough money for the mother to care for her baby and herself for many months.

Paris felt so badly for these poor people that she simply decided to give away all of the cash she was carrying at the time to other needy people in the neighborhood – which was more than $2,000 in total.

Paris tweeted about her encounter afterwards: “India is beautiful, but some parts are very poverty stricken. Broke my heart to see babies sleeping on the streets.”

We visited India a few years ago and like Paris were struck by its startling beauty and warm kindness – but we also could not ignore the degree of poverty we witnessed in some neighborhoods. Hopefully business development and expansion in India – like what Paris is engaging in now – will help alleviate this poverty in the future.