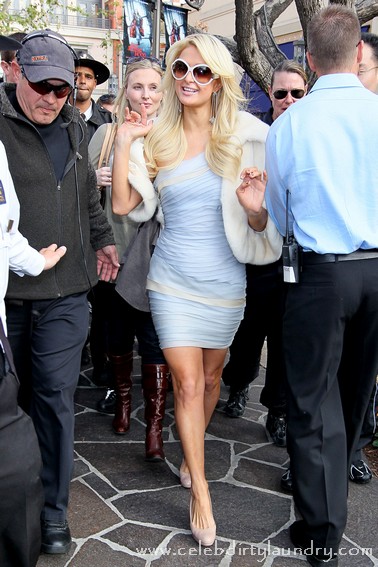 Paris Hilton, 30, caused a bit of a mob arriving at The Grove in Hollywood, CA for an interview for entertainment television news programme ‘Extra’  with Mario Lopez March 1st, 2011.  In typical Paris fashion she was slutting it up in her best Marilyn Monroe imitation and failed.  Paris’ blue dress looking like something a mummy would be wrapped in – and the tacky white sunglasses ughhh is all I can say!

Paris was doing the interview to pimp her new upcoming “World According to Paris” reality show which is set to debut later this spring on Oxygen.  If you want to see the “Real Paris” tune in – or at least she says it will be the real her.   Will you watch the show?  Are you interested in seeing the real Paris?   I can tell you I am not and I will not watch!

Meanwhile Paris who has attended fashion events around the world recently said she is obsessed with Victoria Beckham’s fashion line.  She said: “I am obsessed with her clothes, her range and how she wears the stuff herself. “I’ve met her once or twice and she’s pretty cool. Her new collection is just awesome.”