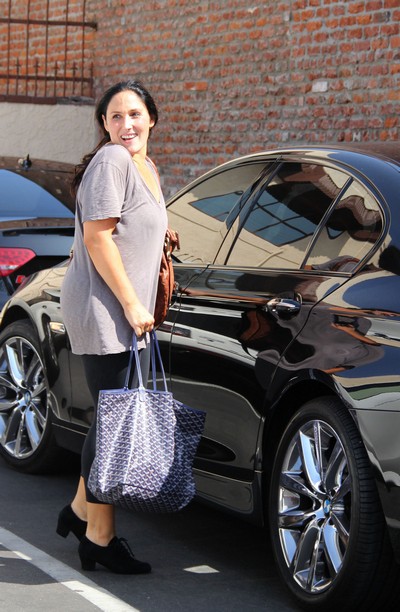 Ricki Lake has threatened to quit ‘Dancing With The Stars’ despite having the top scores 3 weeks running.  The talk show host partnered with 26-year-old Derek Hough, a three-time champion, had topped the leader board in the previous two weeks of the show, but admitted last night she is having problems with the routines and found yesterday’s tango “very confusing.”

Speaking during video footage of the rehearsals for the show, Ricki said: “I feel a tremendous amount of pressure. Has anyone ever quit the show? I am going to have a breakdown. I just can’t do it. It’s just very confusing for me. I am not getting it. I want to quit. Like I totally want to quite – and I am not a quitter.”

However, their determination paid off and the pair received 29 out of 30 from the judges for the Movie Week performance inspired by Alfred Hitchcock thriller ‘Psycho.’

Praising the pair, judge Bruno Tonioli said: “This was a blockbuster performance worthy of three sequels. The thrill of the chase, the build up of tension, the chilling ending, it really was an immaculate tribute to the master of suspense.”

J.R. Martinez and Karina Smirnoff came second on the leader board, earning 26 points out of a potential 30 for their fox trot inspired by ‘Pink Panther.’

Cher was in the audience to support her son, transgender activist Chaz Bono, and cried during his Paso Doble to the theme tune of boxing movie ‘Rocky.’ Still, Chaz’s performance was well below that of many other competitors.

He was lucky to earn 21 points for his performance although Cher crowed that she was “so proud” of him.

She tweeted: “OMG! I WAS CRYING ! WASNT EXPECTING 2 B SO NERVOUS ! BROKE MY BRACELET CLAPPING ! IM SO PROUD !! CHAZ WAS GREAT! LOVED DAVID ARQUETTE 2nd”

Carson Kressley came in bottom of the score board, earning just 20 points for his performance to the ‘Curse of the Black Pearl’ theme from ‘Pirates of the Caribbean.’

Head judge Len Goodman was less than impressed with the performance, saying: “It was like childbirth; terrible when it’s happening and a joy when it’s over.”