Robert Pattinson HOT On The Cover Of Playgirl Magazine 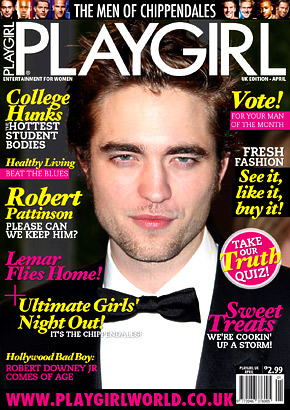 I was so excited when I saw that Twlight star Robert Pattinson, 24,  was going to be in Playgirl magazine – but calm down ladies although most guys who grace the cover do it naked, Robert is fully clothed.  This is the UK version of Playgirl and is actually the very first issue.   Robert is the lucky first cover guy and he appears not naked but in a tuxedo.   Either way he is still adorable!   The article in the magazine is titled “Robert Pattinson – please can we keep him” and my answer to the UK Magazine is NO!

“His youthful good looks have earned him top spot as world’s sexiest male, highest paid actor, and even a slot in Time Magazine’s ‘100 Most Influential People in the World,’ writes Playgirl’s Andy Bright.

Meanwhile Robert and Kristen Stewert on screen and off screen couple, are in British Columbia for the past few weeks filming scenes for Breaking Dawn at numerous locations.  They  were shooting at the Orpheum Theatre in downtown Vancouver on Monday, before moving on to Pemberton, just outside of Whistler.  They were spotted at a movie – Red Riding Hood in Squamish, and even took time to pose with fans.