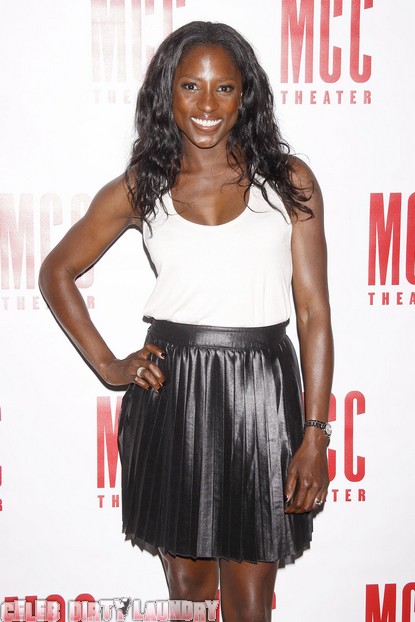 Warning: This post contains possible spoilers for the season finale episode of True Blood. So read on at your own risk! Read our official True Blood season finale recap HERE!

In the season finale episode of True Blood, it appears that Rutina Wesley’s character, Tara, dies in the end of the episode. After her best friend Sookie is confronted by a gun wielding Debbie Pelt, Tara dives in front of her and takes the bullet. Her head is blown off, leaving fans to wonder if she’ll be back in the show’s fifth season.

Rutina has revealed that she is unsure about her character’s fate on the hit vampire show. She opened up about the scene, saying that she’s still in the dark about Tara’s fate.

She said, “Well, I mean, half my head is missing. I’m just gonna keep saying that.”

She went on to reveal, “You know, it’s True Blood. I feel like anything is possible. If anything it is the golden hour though. If she is able to be saved, it’s like she’s got 20 seconds. It’s not a lot of time. I’m curious to see what they’re going to do with all of it. I hope I’m back. But again, half my head is missing.”

She went on to talk about the emotional filming for the scene. She said, “It was emotional. I think we all went out afterwards – me, Britt (Debbie) and Anna (Sookie) – just to sort of have a little celebration. But it was very, very emotional. I don’t think there was a dry eye when we shot that scene. It’s very clear the relationship when Tara goes, ‘I would die for you’. Basically, I would take a bullet for you.”

Rutina has also revealed that she has signed on for season five of the show, but isn’t aware of what capacity she’s going to serve.

Perhaps Eric and Bill will both show up, after sensing Sookie’s fear and save Tara? Or maybe they’ll turn her into a new vampire? That would be interesting, don’t you think?

Do you want to see Tara return to the show? Should they make her a vampire? If so, who should turn her, Eric or Bill? Let us know your thoughts in the comments!