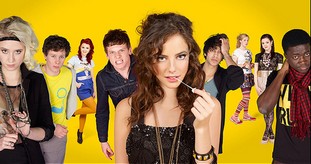 Co-creator and writer of (British) Skins, Jamie Brittain, who launched the show in January 2007, last night confirmed his departure from the controversial teen drama.  He said: “I’ve just said everything I want to say.  It’s time for new writers to come forward and portray their truth about teenagers.”

Nice words but the truth is that Skins is bombing – after the fifth series saw viewing figures fall by half and fans queuing up to blast the show on internet forums it was clearly time for a change.   Jamie claimed the sixth series – commissioned by E4 bosses at the same time as series five – will be “amazing” when it is screened next year.

He told a fan he was not “abandoning” the show and insisted it was “just time for me to go.”  Series five, featuring a “third generation” of cast members, ended with just over 600,000 viewers – way down on series four which ended with a combined E4 and E4+1 audience of 1.1million.

One wrote online: “This series was by far the worst – dreary and predictable.”  Another moaned: “The only reason it is getting a sixth series is because it was commissioned in advance.”  New writers will have to be found, but insiders fear that the show is nearing the end.  A source said: “It doesn’t look like there’s much life in Skins any more.”

Never fear – as long as there is big money in it producers will come up with new ways to scandalize and shock us.