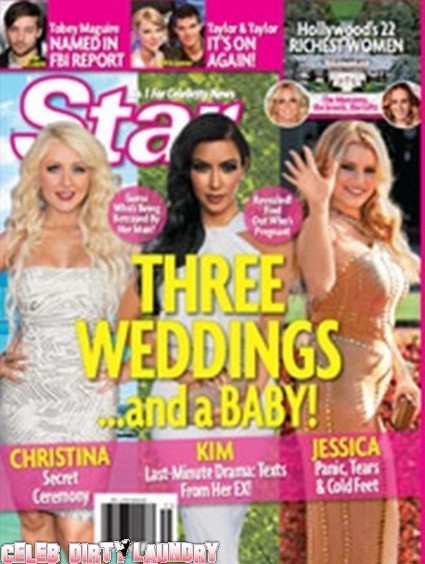 The August 29th issue of Star Magazine features “Christina Aguilera, Kim Kardashian, Jessica Simpson: 3 wedding and a baby.’  The magazine has the scoop on the three upcoming weddings.   They claim Christina Aguilera, 30,  who has been dating Matt Rutler since she split with Jordan Bratman had a secret wedding ceremony.   They are also claiming that Jessica Simpson, 31,  is getting cold feet.  Jessica is engaged to marry dating former NFL player Eric Johnson.

The last wedding they have info on is Kim Kardashian and Kris Humphries upcoming nuptuals.  They are reporting there is last minute drama with her ex Reggie Bush.  Rumors have been circulating that Reggie is upset that Kim is getting married.  But Star is claiming Reggie is texting her!  The wedding is Saturday and I don’t think Reggie is going to have much luck stopping it.  The magazine is also claiming there is a ‘baby’.

Also in this week’s issue they claim Twilight cutie Taylor Lautner and singer Taylor swift are back together.  In late 2009 the two were reportedly dating.  It seems we should also expect a new fashion line from Duchess of Cambridge Kate Middleton and her sister Pippa Middleton.

If you want to find out all this and more head out and buy a copy of Star Magazine that is available at newsstands now!