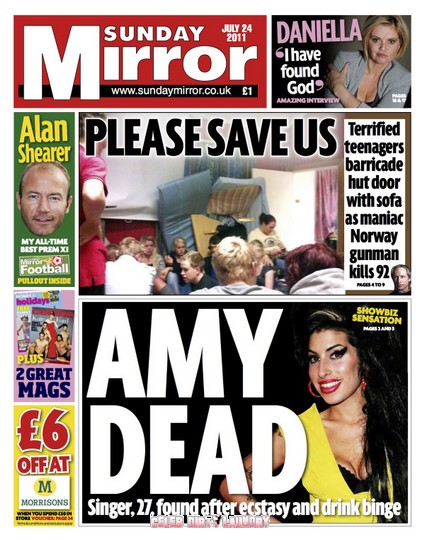 The Daily Mirror UK will be releasing the cover above tomorrow.  Blazoned across the cover ‘Amy Dead – Singer, 27, found after ecstasy and drink binge.’    Troubled singer Amy Winehouse, 27,  passed away today in her London home.   Amy spent many years in and out of rehab fighting a heroin and alcohol addiction.  Yesterday she collapsed in her house and friends called an ambulance but they could not help Amy.   According to the paper a source said she was using ecstasy.

The Daily Mirror UK has more:  Last night Amy’s distraught father Mitch Winehouse wept and said: “This isn’t real… I’m completely devastated.”  Speaking from New York, the taxi driver and part-time ­singer, who had predicted his daughter would die if she didn’t quit booze and drugs, added: “I’m coming home. I have to be with Amy. I can’t crack up for her sake.”

Although the Mirror is saying it was alcohol and ecstasy, police have not released an official cause of death.  Superintendent Raj Kohli of the Metropolitan police released a statement saying, “Next of kin have been informed, and I can confirm that officers are now satisfied that the deceased is Amy Winehouse… I am aware of reports suggesting this death is the result of a suspected drugs overdose, but I would like to re-emphasize that no post-mortem examination has yet taken place and it would be inappropriate to speculate on the cause of death.”