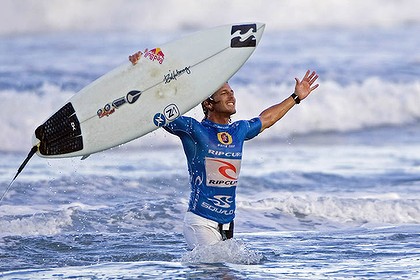 Champion surfer Andy Irons died from a cardiac arrest and “acute mixed drug ingestion”, according to his long-awaited autopsy and toxicology reports.  The three-times world champion was found dead at a hotel in Dallas, Texas in November, aged 32 – just a month before he was due to become a first-time father.

Irons had been suffering from dengue fever in the lead-up to his shocking death and had pulled out of a surfing event in Puerto Rico to battle the viral infection.

The investigation into his death was put off while his widow Lyndie Dupuis gave birth to their son, Andy Axel, and now Irons’ family has released a statement revealing he didn’t die from dengue fever, but from a cardiac arrest caused by the hardening of his coronary arteries.

There were also traces of several drugs in his blood, including a metabolite which often suggests cocaine use.

Dr. Vincent Di Maio, a forensic pathologist, explains, “A plaque of this severity, located in the anterior descending coronary artery, is commonly associated with sudden death. The only unusual aspect of the case is Mr. Irons’ age, 32 years old. Deaths due to coronary atherosclerosis usually begin to appear in the late 40s. Individuals such as Mr. Irons have a genetic predisposition to early development of coronary artery disease. In about 25 per cent of the population, the first symptom of severe coronary atherosclerosis is sudden death.”

The official toxicology reports from the Tarrant County Medical Examiner also named a second cause of death as “acute mixed drug ingestion”, revealing he had allegedly taken drugs in the hours leading up to his passing.

Di Maio believes most of the substances found in the surfer’s system, which included Xanax and Methadone, were at therapeutic levels, while a toxicologist informed the family that levels of Benzoylecgonine, which was also found in his system, were allegedly “consistent with the use of cocaine at about 30 hours prior to his death.”

Whatever the case – ‘methadone at therapeutic levels’ means that Andy Irons was a former heroin junkie and cocaine metabolites in the blood mean cocaine use – Andy Irons’ premature death was definitely influenced, if not completely caused by, drug abuse.