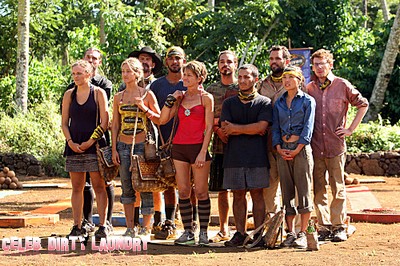 Tonight is the ninth episode of Survivor: South Pacific and it is called ‘Cut Throat.’  Stay tuned as we cover the show with up-to-the-minute details.  On last week’s episode Keith was voted out.  Ozzy’s plan went very wrong last week instead of infiltrating Upolu, Cochran became their pawn.  So instead of helping his tribe as Ozzy planned, Savaii lost one of their members when Cochran flipped.  Once thing is clear at this point at this point Coach is orchestrating the game so far.  As Coach predicted would happen,  “the nerd finally rose up to the bully.”  Jim called Cochran a coward twice and Jim looked so mad at Cochran I think if he could, he would kill him.  Brandon rose to his defense.  If you missed last week’s episode you can read our official recap here!

In the preview for this week’s episode it looks like life is going to get very difficult for Cochran.  The former Upolu team continues to berate Cochran for “backstabbing” them, with Whitney screaming “You disgust me!“—to the guy she snubbed and put on the chopping block more than once.  What do you think did Ozzy make the right decision?   Is he going to be able to win every immunity challenge and save himself?  Was Cochran wrong?

Tonight’s official episode Synopsis: After a shocking betrayal, one castaway faces the wrath of a former alliance, and a double eviction rocks the newly merged Te Tuna tribe.

Tonight’s recap: The team is coming back from Tribal council and they are not pleased with Cochran.  Ozzy tells Cochran that he totally screwed him over.  Brandon comes in and tells Ozzy he does not want it to get aggressive and Ozzy tells him they are not in the ghetto LOL.  Ozzy just does not understand what happened and why Cochran betrayed him.   Whitney is upset and tells Cochran that they will all be voted out one by one.  Cochran has mixed emotions, he is glad he stood up for himself but is upset his former team hates him now.  What a moron, what did he expect?

Coach is please at the amazing feat he pulled at Tribal Council.  He wants to celebrate and does it with Tai Chi.  Coach consults Cochran on who should go next and he says Ozzy or Jim.  Ozzy is devastated and is going to work hard to stay in the game.

Brandon is taking to Cochran and he is saying that there will be six votes for Ozzy.  Ozzy walks up to Coach and tells him he does not want to go.  Coach tells him he does not want him to go either.  Coach is not sure if it is too little too late for Ozzy.  Jim is not pleased with Cochran and calls him a coward to everyone and says he could never throw his team under the bus.

Jim gets an idea he wants to give his immunity to Ozzy and then tell the people that they need to play with honor and vote Cochran out.  He intends to surprise everyone at Tribal council.  Ozzy does not really believe that it is going to happen.

Tribal council: Jeff asks Cochran how his team took what he did at last tribal council.  Cochran tells Jeff that Jim was the hardest on him.  Cochran says he did not take it personally but he wanted to play the game his own way.  Jim complains because he saved Cochran so many times, Whitney saved Cochran and Ozzy saved Cochran.  He feels what Cochran did was dishonorable.  Brandon defends Cochran and says that the total tribe was standing behind him.

Jim as his final words says he was thinking of giving his immunity to Ozzy.  He tells the others tribe members that it is time that they have to show people that they have to play with honor.   Couch disagrees and says it will show people if you stand up for yourself you get screwed.    Ozzy tells them if they send him to Redemption Island it is a big mistake because he will get rested and eat well and he will be hard to beat.

At the end Jim decides to keep his immunity idol and not give it to Ozzy.  He hopes he has convinced the tribe not to vote Ozzy off.

Immunity Challenge 2: Back to the tribe there is another immunity challenge but there is a twist to this one.  People can sit out and eat a feast if they do not participate in the challenge.

Dawn, Whitney and Jim decide to participate in the challenge and the other members feast like piggy’s while the other three fight it out.  Jim is the first to drop out while Dawn and Whitney fight it out.  The tribe members who are eating eat so much they are getting sick.

Whitney ends up winning the challenge.

Ozzy comes over to Coach and other tribe members and joking around.  Jim thinks that Cochran is playing the best strategic game that he is ha ever seen.  Jim approached Edna and Albert and tried to convince them to vote out Edna.  Albert says he does not have to entertain Jim’s plan he has a better plan.  Albert wants to get rid of Dawn because he thinks she is dangerous.  Albert is worried people may gravitate to Dawn in desperation.  He does not want to vote out Jim because he thinks he can beat him.  Coach also sees that Dawn is a snake and Jim as a rhino.  He hopes they send the right person home tonight.

Tribal Council:  The tribe members make it pretty clear they know Dawn is a snake.  Whitney gets upset and cries because people think she is a bully and she says nothing is further from the truth.

Jim is the 10th person voted off Survivor South Pacific and on his way to Redemption Island.

These people have to be the dumbest people I have ever seen.  Cochran is such a snake and they are all fooled, I would not be surprised if he made it to the final four.  What do you think?  Sound out in the comments below!