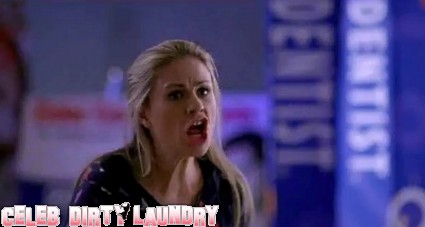 Descriptions of the final two episodes of season 4 of ‘True Blood’ are out and not surprisingly our favorite fairy plays a major role. The synopsis reveals how Sookie will take the matter into her own hands in the showdown between witches and vampires when it puts the ones she loves in danger.

SPOILER!!! – HBO’s description of the September 4 episode – ‘Soul of Fire’: “As the Wiccan-vampire standoff reaches a critical juncture, Sookie summons her faerie powers to prevent Marnie from bewitching Bill, Eric and Pam into a suicide march, while Jesus casts a secret spell designed to un-bind Marnie/Antonia and break the witch’s deadly defenses.”

Also from the penultimate episode, “Sam settles a score with Marcus; Alcide confronts Debbie about her allegiances; Andy finds unexpected passion in the forest; Lafayette is consumed by the past.”

The September 11 finale is set during “Samhain, Wicca’s greatest holy day”, when spirits of the dead surface in Bon Temps.  This gives Sookie “valuable allies to combat Marnie’s newest incarnation.” The synopsis also reveals that “Lafayette’s latest medium encounter imperils his relationship with Jesus”, while “Jason finds confession good for the soul, but not the body.”

“Alcide makes a heartfelt appeal to the woman he loves; Terry receives an unexpected visitor at Merlotte’s; Sam and Luna envision a storybook ending, for once; Nan wears out her welcome with Bill and Eric. Debbie confronts Sookie and Tara with deadly consequences, and the denizens of Bon Temps brace for a new crisis with a familiar face.”

Sookie will actually start using her power to intervene Marnie’s plan to kill Bill in next week’s episode of “True Blood”. In the August 28 outing, she summons her most potent powers and breaks a spell in the process.

The show is campy – but in a good way.