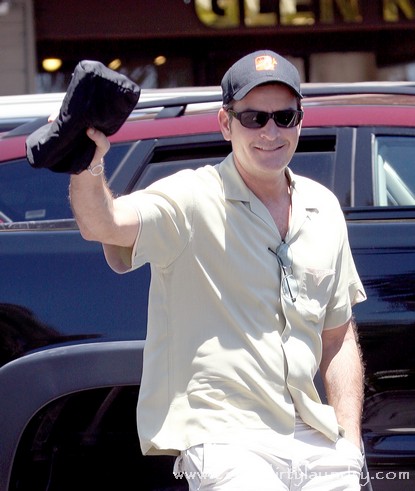 Charlie Sheen was ready to go back to work on ‘Two and a Half Men’ this week, but the show’s top producer, Chuck Lorre, killed the plan.  Charlie in a disjointed interview with Dan Patrick claimed he returned to work and banged on the door but no one was there.  But the truth behind the interview and the show’s hiatus is more complex.

“Charlie is read to come back to work now,” according to a source. “He was going to come back this week, but Chuck Lorre said he doesn’t want to start filming again until the end of the month.”

That means a high likelihood that the show will produce fewer episodes than scheduled, leading to a pay cut for many people.   Lorre’s hang up? “He just said, ‘I’m not ready,’ and he’s one of the biggest producers on TV.  He can do whatever he wants. He’s like a god at Warner Brothers.”

And, yes, the source insists, Sheen is ready to work.  “Charlie is clean. He’s sober.  But Chuck’s not ready to resume the show and it’s all up to Chuck Lorre,” the source said. “Charlie will make up all of the episodes.”  “In fact if they had let him come back this week, they would have only been one episode behind, because there was a down week scheduled.”

Warner Brothers execs will not overrule Lorre, insists the source. “He’s too powerful there,” the source said.  “He gets what he wants.”  “And that’s why Charlie is not back at work.”

Could Lorre be teaching Charlie a lesson?