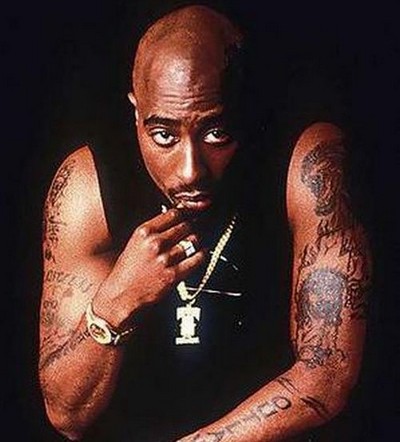 A sex tape featuring Tupac Shakur has been discovered and the person in possession of the tape is making plans to release it.  The sex tape lasts five minutes and shows Tupac and an unidentified woman, presumably some pathetic groupie, engaged in oral sex. While Tupac receives the oral sex he sings and dances along to his own music.

As the tape of the oral sex ends it appears he’s ready to begin sexual intercourse with the same sad groupie indicating that there might be another tape featuring intercourse.

Filmed during a house party in 1991, the sex tape also features Tupac holding a drink in one hand and a marijuana joint in the other while engaging in conversation with Money B from Digital Underground while the woman continues to do her thing. Tupac walks into a room with no shirt and his pants down around his ankles holding his drink and joint and pulls the mystery woman towards his crotch and she happily obliges.

Tupac is by no means the first celebrity to appear in a sex tape.

Former Playboy model Kendra Wilkinson was left “hurt” last year when a video she made with then-boyfriend Justin Frye when she was just 18 was released as a DVD entitled ‘Kendra Exposed’.

In 2007, a DVD entitled ‘Kim Kardashian Superstar’ was put on sale and featured the socialite and her former boyfriend Ray J having sex.

This Tupac sex tape pretty well summarizes the views towards women typically expressed in hip hop – not too much respect.