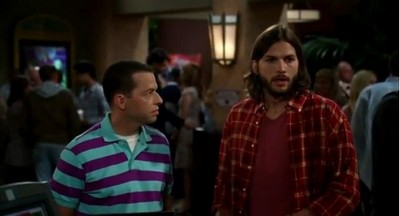 An all new episode of Two and a Half Men airs tonight on ABC.  The episode is called ‘The Squat and The Hover.’  Is it just me or are the episodes getting more and more boring week after week?  On last week’s episode Alan has trouble accepting Lyndsey’s seedy movie past and Walden tries to cheer him up by throwing a party.  If you missed last week’s episode you can read our official recap here!

The show starts off with Walden popping into the living room naked and Alan makes a comment about him having his ‘junk on the sofa” when he plops down on the couch between him and Jake. Walden goes through the mail and hands Alan an envelope for him from Penis Industries. Walden opens his mail and receives his divorce papers, he vents his frustration by parading around the room, jumping up and down naked. After seeing Walden naked, Jake turns around to his dad and says “please tell me I’m not finished growing”.

Later in the day, Walden now has his clothes on and Alan catches him near the fireplace burning all his mementos from his soon-to-be ex-wife, Brigitte. Walden tells Alan that he’s going to burn everything and then move to New York which causes Alan to panic (no house to live in) and suggest that Walden see a shrink to get over his depression.

Walden goes to see the shrink (Jane Lynch from Glee) and she tells him to put his marriage on the back burner so they can talk about his childhood. Walden reveals that his father ran off with a lady sword swallower when he was four and was raised by his mother. He then goes on to say that his ex-wife was a lot like his mother and he comes to the revelation that he was acting really immature with his wife. Walden asks the shrink if he married a woman like his mother, does that mean when he was having sex with his wife, he was really having sex with his mother? When Walden leaves, the shrink (Jane Lynch) says “maybe I’m not gay after all.”

After the shrink appointment, Alan goes to the movies with Walden when they sees his ex Bridget with another man. Bridget introduces her friend Alex to Walden, and Walden says, did you hear about my giant penis? Alan keeps going on and on about how good looking Alex is. Bridget explains that Walden and Alan live together and as they leave Alex turns to Bridget and says ‘he’s going to split that little guy in half’

At the movies, Alan is wondering why Walden’s ex snagged such a good looking guy and asks Walden if she has a ‘magical vagina’.

Later at a bar, Walden tries to hook up with a girl who is gay and when she tells him that they are gay, Walden says that he and Alan are too and grabs him for a big kiss on the lips. The girls end up back at Walden’s place even though they are dating. Walden apologizes for kissing Alan and Alan says “it’s ok, if I am going to be kissed by a man I prefer it being from the son of god.”

Walden and Alan get deeper into their lie of being gay and Walden can’t take it anymore, he reveals to one of the girls, Dani, that he is on ‘team vagina’ and she asks, if you’re not gay then what’s up with Alan.

Dani catches Alan kissing her girlfriend and punches him in the nose.  Alan takes Walden back to the movies to cheer him up and after a confession by Alan that he only wanted Walden to see the shrink so he wouldn’t move to New York thus causing Alan to not have a place to live. Walden tells Alan it’s ok, he’s staying and wouldn’t think of leaving his best friend. Walden puts his arm around Alan to hug him and a few rows above, Bridget and Alex see them and Alex says  “I told you.”

That is it for the show, not much better that the rest of the weeks.  The show needs an infusion of Charlie Sheen !  What did you think?

Our recap tonight brought to you by Fit Fab Celeb