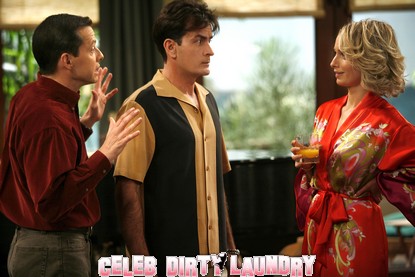 With all of the negative publicity surrounding leading star Charlie Sheen‘s battles with producer Chuck Lorre and Warner Brothers, CBS executives have decided not to submit ‘Two and a Half Men’ for best the Comedy Series Emmy this year.

‘Two and a Half Men’ qualified for submission in the category with 16 other shows produced and aired this season, but an insider revealed that the feeling at CBS was that is wasn’t appropriate given the unpleasant circumstances surrounding the show recently.

‘Two and a Half Men’ has been nominated for Best Comedy Series three times, most recently in 2008.

However, the source adds that while it’s not submitting the show for Best Comedy, the studio is fully supporting the show’s co-stars, including Jon Cryer, Holland Taylor, Angus T. Jones and Conchata Ferrell, in supporting category nominations.

Production on the hit CBS show stopped in February after Charlie Sheen was rendered unfit due to his hard partying followed by his public attacks against the show’s producers – especially the show’s creator, Chuck Lorre.

Sheen was subsequently fired from the show and is slated to be replaced by Ashton Kutcher when it returns in the fall for a ninth season.