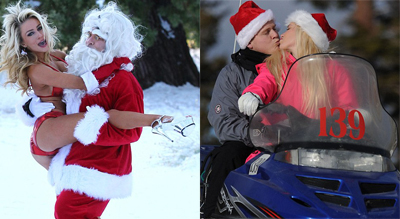 We have no idea whether Courtney Stodden and Heidi Montag have ever met, but it’s pretty clear that the 17-year-old child bride seems to be following in Mrs. Spencer Pratt‘s footsteps, likely in an attempt to hang onto the 15 minutes of fame she garnered when she wed her much older husband, the 51-year-old Doug Hutchison, last summer.

First, Courtney reportedly opted for some giant breast implants (not unlike 25-year-old Heidi’s own G cup tatas.) Next, we hear Courtney and Doug (should we start calling them “Coug” now?) are shopping around for their very own reality show but recently turned down an opportunity to appear on a show called Relationship Rehab.

Guess who also turned down an appearance on Relationship Rehab? That would be Speidi, who have also been trying to land another reality show ever since they appeared on MTV’s The Hills.

And now, just in time for Christmas, both Courtney and Heidi are “treating” us and the general population at-large to some staged Christmas pics of them with their men!

Keeping it classy, Courtney decided to don a red bikini and straddle Doug, who’s dressed as Santa Clause, in her photo set, while, Heidi and Spencer opted to be photographed frolicking around in the snow and making out on a snow-mobile.

Both of the “candid” photo shoots make us want to hurl just a little bit, so we’ll let you decide: Whose fameball Christmas photos do you think are the most obnoxious?