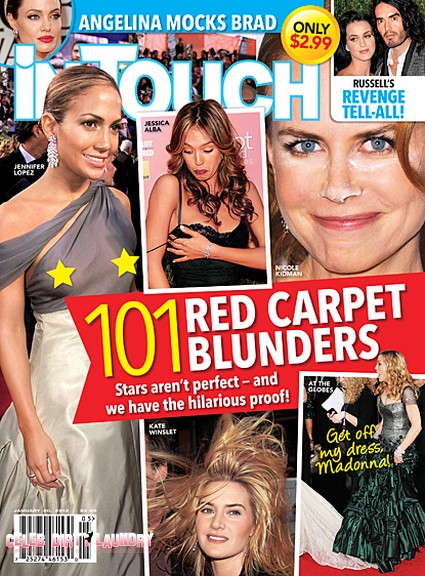 The current issue of In Touch features the cover story ‘101 Red Carpet Blunders.’  The 2012 Golden Globe awards aired this week so there were lots of fun happenings.  According to In Touch celebs are not perfect, who knew…. and they have the hilarious proof!  The pictures include Kate Winslet’s static cling hair,  Madonna tramping on someone’s dress on the red carpet, Jennifer Lopez’s nip reveal and Jessica Alba’s broken top they have it all.

In Touch has the more: “At the Golden Globes on January 15, Madonna literally walked all over Jessica Biel — her Valentino gown, that is. Oh, and then there’s the time Justin Bieber dropped Usher’s son! (He was totally fine!) This week, we bring you the top 101 red carpet blunders.”

They are claiming that Russell Brand has written a tell-all on his marriage to Katy Perry.  Us Magazine is making the same claim so perhaps we will soon see a tell-all with all the details of what transpired in the marriage of Russell and Katie!

For all this and more, pick up the current issue of In Touch magazine.