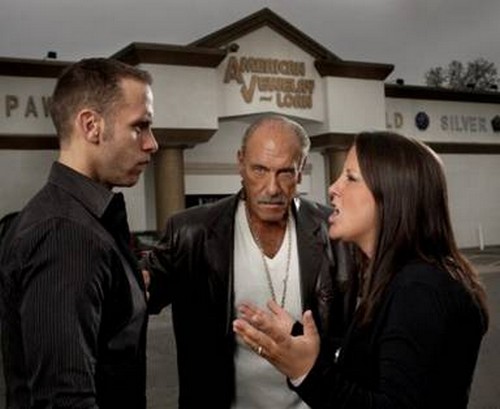 It’s countdown time!  Here at CDL we’ve spent the last few days counting down some of our favorite television shows that we think deserve a closer look. They may be in a time slot that competes with one of your tried and true favorites, so thank god for DVR’s!  Tonight we’re going to introduce you to Hardcore Pawn which airs on Tuesday at 9pm on TruTv.

Hardcore Pawn takes you into the heart of Detroit and introduces you to American Jewelry and Loan, a family run pawn shop that sees 1000 customers in its50,000 square foot store nearly every day.  Les Gold is the mastermind behind the art of brokering and he first started working in his families little shop 30 years ago. Les is an old school pawn broker that has heard every BS story under the sun and shows absolutely no fear when dealing with out of control customers. CDL first interviewed Les a few months ago and he told us all about witnessing a shooting in his families store back in the 70’s. He knows things can go wrong which is why he employs some of the biggest and baddest security guys I’ve ever seen. Les also has a huge heart and he loves being in a position to help out people that are in need of fast cash.

Les’  two children help him run the business. Ashley takes nothing from anyone and can really rub people the wrong way but I think a huge part of that is because she’s usually having to defend herself. Either the customers are giving her a rough time or her brother is undermining her authority and ability to know a good deal when it crosses her line of vision. Seth always seems to have something to prove. Either Ashley is insisting that he only buys trash or else he pulls a shady maneuver- like trying to sell the families second pawn shop right out from Les- that leaves him having to find his way back into the bosses good graces.

While a lot of reality shows seem to be scripted, Hardcore Pawn falls into the category of you-can’t-make-this-up. The customers are usually flat out, straight up CRAZY. Like the 40 year old power lifter with a beer gut that thought she’d get a better deal if she wore her sports bra instead of a shirt! She practiced her stretches while the employees stared in awe. Then there was the guy who seemed to be trippin’ on something strong when security was instructed to escort him out. He screamed life a banshee, dropped to the floor and literally rolled himself up in the entrance way carpeting. It’s an endless parade of pajama pants, bizarre characters and every now and then, a person that has a real story to tug at your heart.

Check out our interview with Hardcore Pawn’s Les Gold Tells Us About The Tragedy That Made Him Fearless!

Hardcore Pawn gives you 30 minutes to forget about whatever  may have wrecked your day and I can honestly say, I’m always in a better mood after each episode! Check it out and see if you have the same reaction! Hardcore Pawn airs at Tuesdays at 9:00 p.m. (ET/PT) on truTV.