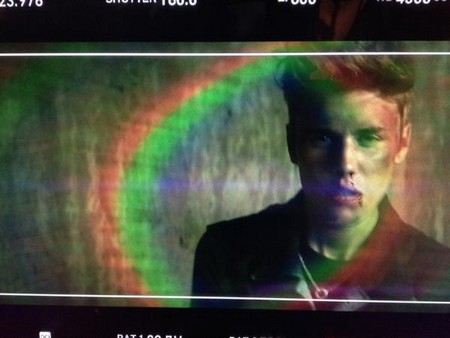 Justin Bieber appears to have been beaten up and a new photo shows him with a swollen cheek, a bloody nose and a busted lip! Poor Justin looks like he got into a fight with his good buddies Mike Tyson and Floyd Mayweather Jr., instead of just hanging out with them as one of their groupies. Apparently Justin is playing the tough guy for his new video for ‘As Long As You Love Me!’ and this entails fighting for his lady love.  Can you imagine…

Bieber’s manager, Scooter Braun, who always prefers to speak for his client lest Justin say something stupid, again, let us know on Twitter: “‪#AsLongAsYouLoveMe is going to be more than a music video..it is a short film. NEXT LEVEL.”  Scooter panders to Justin’s dreams of being a tough guy but he better settle his pint-sized pugilist down.  Between Justin’s recent assault on a photographer and his high speed chase through the streets of Los Angeles last week you get the impression that all this acting is going to the Bieb’s head.  Is Justin becoming a bad boy?

As part of the seemingly endless stream of hype, Justin’s music video director for ALAYLM, Anthony Mandler, tweeted : “All I can say is that all 25 million of you are gonna lose your minds soon enough…’It’s Justin…’”

Listen Mandler, we are losing our minds already without even seeing the music video.  In fact many of us lost our minds when Bieber became a household name.  What we want to see is what happens when Bieber finally dumps Selena Gomez for good.  The dude is champing at the bit to get at all those girls who think he is the most important thing in their lives.  And there is Selena like a millstone around his skinny neck…  Scooter must have his hands full convincing Justin to keep his hand off the customers.  Even worse, Scooter now sees that buying Bieber fast cars is not a viable option for dealing with his client’s growing sexual frustration.