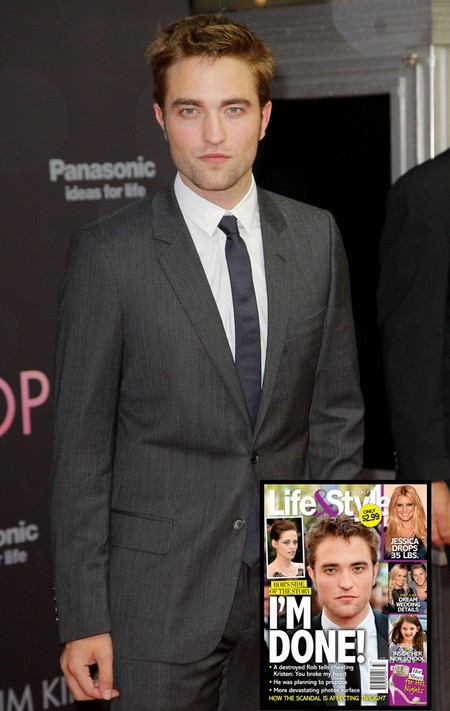 A reconciliation between Robert Pattinson and Kristen Stewart seems like a hopeless dream if you catch a glimpse of the tabloid covers this week. Life & Style magazine point blank says Rob’s done with Kristen and destroyed by her betrayal and subsequent lying.

Poor Rob. I hope he isn’t going to the grocery store while he’s holed up at Reese Witherspoon’s home. He wouldn’t be able to take the fact his dejected face is on every glossy cover! This week Life & Style is straying from the straying Kristen and giving the reader Rob’s side of the story. It claims Rob was only weeks away from proposing to his Twilight co-star and, in one of the few forms of contact they’ve had since the cheating story broke, he confessed she broke his heart. AND, there’s more pics! Do we need more? I think we got the point the first time around but I know I won’t be able to stop myself from looking!

And then in much more important news, the cover tantalizes with how the split heard round the world is affecting Twilight. In just two months the cast is expected to put on their happy faces for the final installment of the blockbuster franchise but Rob is already showing signs that he might not be ready to play along. Kristen is fast becoming the most hated woman in Hollywood and Rob’s fans are talking about boycotting her films. How will that work with Twilight? Rob’s fans want to go to see him but don’t want to go to see her. I’m sure the boycott only takes effect for movies Rob doesn’t star in!

I’m anxious to hear what Rob has to say! We’ve already spotted Kristen out since the split looking like hell now we want to see how Rob is holding up. It can’t be good since he’s in hiding!

Will you pick up this week’s Life & Style to catch up on Rob’s heartbreak? Kristen’s betrayal is so last week. Rob’s fans want to know how he’s coping so I’m sure this issue will be a hot one!