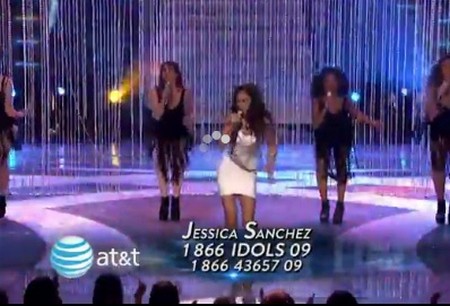 Did you watch American Idol last night when Idol hopeful, Jessica Sanchez decided to release her “inner cheetah” and fail? If you missed any of it, you can read the full recap HERE and watch her video HERE of when she performed ‘Proud Mary’ by Tina Turner.

Before performing ‘Proud Mary’ live, Jessica was fortunate enough to be guest mentored by not only Jimmy Lovine, but Bruce Springsteen’s guitarist, world famous Steven Van Zandt. During the session, Jimmy thought the song was a tall order for Jessica, he said, “it’s got the note and the range, but Jessica needs to come to the party”. Steven admitted that he in fact wanted to talk Jessica out of performing the song and believe me, he should have!

Tina Turner’s career has spanned over 50 years and she has been called the “Queen of Rock ‘n’ Roll”, so I am left wondering why on God’s earth would Jessica dance around on stage and try to imitate her. It is one thing to take a legend’s song, make it your own if you want to like Phillip Phillips, that’s fine. But to outright imitate and mimic a legend is plain and simple, insulting. Jessica’s performance was nothing but awkward and embarrassing.

When it came to the judging, once again, only Randy had the balls to tell the truth, he said, “This performance was barely ok for me because you took on probably the biggest dragon of the night I mean Tina performs, she worked the stage she sweated the stage, so the performance was ok, but it really didn’t sit with me.”

After the performance, behind stage, Jessica said that she tried to get her “inner cheetah” out.

Well girlfriend, I got just one thing to say, “lock the cheetah up and throw away the key!”