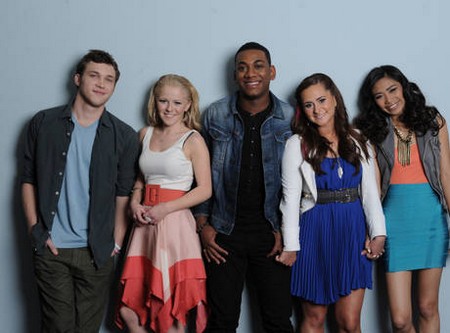 Tonight American Idol returns to Fox with the ‘Top 5’ Performance Show and it is British week.  Our Top 5 will take the stage and sing 2 songs. Stand by as we live blog tonight’s show with all the exciting up-to-the-minute details.  On last week’s show Hollie Cavanagh and Elise Testone were in the bottom two and Elise Testone was sent home.  If you missed the show you can read our full and detailed recap here.  If you missed any of the performances from last week you can see them here.

The song list for tonight’s show has been leaked:  The 60’s hits will be: “Ain’t Too Proud To Beg” by the Temptations; “The Letter” by the The Box Tops; “Proud Mary” by Ike & Tina Turner; “Fortunate Son” by Creedence Clearwater Revival and “River Deep, Mountain High” by Ike & Tina Turner.  The British hits will be: “To Love Somebody” by the Bee Gees; “Time of the Season” by the The Zombies; “Bleeding Love” by Leona Lewis; “You Are So Beautiful” by Joe Crocker and “You Don’t Have To Love Me” by Dusty Springfield.

So we saw the promo for New Girl with the cast talking about watching American Idol – pretty clever – well done.

Steven: loved her doing the blues

J-Lo: could feel the energy – a new type of Hollie

Randy: tells her to be less self- conscious

Steven: says Phil messed up the melody but got away with it

J-Lo: she didn’t even know the song… they don’t pay her to think, do they?

Randy: Phillip made it new for him and he loved it

by the way – it seems like Phillip has a GF!!

Steven: he has nothing much to say.

J-Lo:  lots of praise for Skylar’s enthusiasm from J-Lo – “It’s like you attack every single song,”

Randy: he says CCR should be proud… is he nuts, does he think the great CCR cares about this talent show?  When Randy and Skylar are footnotes CCR will still be an important entry.

Steven: “You need to embrace each other up there!”

J-Lo: says that since the song was sung by two men originally these two should have been okay with it.

Randy: said they did a swell job – and Ryan makes a ‘Top Gun’ reference “Goose and Maverick, ladies and gentlemen,” which Ledet misses.  Ledet is a much better singer by the way – so he is not so up-to-date on pop culture…

Steven: says she did a good job for a kid – but this song is not meant for Jessica… yet.  What can Jessica know about ‘working for the man?’

J-Lo: says she was great

Randy: was honest and said the performance was marginal ‘barely okay.’

Steven: he says Josh is one of the two best Idol singers ever – well that is pretty nice.

J-Lo: “You’re like a throwback from another era” J-Lo says – like when women didn’t date men ½ their age, that era Jennifer?

Randy: says Joshua could bring back R&B – loves it.

Steven: says he loved it several times over!

J-Lo: claims to appreciate the quality of the emotion in the performance.

Randy: says that Hollie is peaking when it counts – but will she be good enough?

This dude is a real performer!  He really puts it out there!

Steven: says he is happy Phillip sang this song

J-Lo: she likes it too

It was all about who could get louder faster – gag!  Why not just give them gloves and a ref?

Steven: thought is was wonderful – ya right…

Steven: says she just gets better all the time

J-Lo: says she was so good with that performance she could win

Jessica Sanchez singing “You Are So Beautiful”

Steven: “showed America how beautiful your voice is again.”

Randy: she has an amazing talent level.

Joshua Ledet sings “To Love Somebody”

Standing ovation from all the judges

Steven: loves it and agrees with the other judges.

Randy: says Joshua is one of the best ever on the show.

Come back tomorrow when we do the live recap of the Idol results show – 8pm EST!