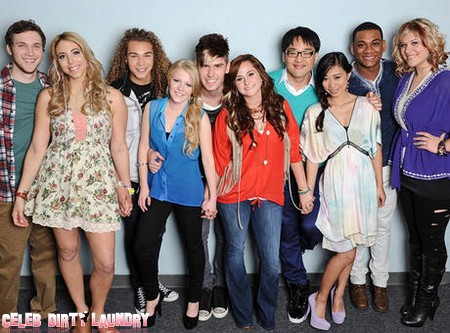 American Idol 2012 is back tonight and we have our top 10.  Stand by as we live blog the show with all the up-to-the-minute details.  On last week’s episode  Jermaine Jones was eliminated for not airing his dirty laundry about his criminal record.  They listed his crimes and gave him a good lecture.   Jermaine claimed that he was scared and nervous with thought that he would be penalized for his past.  If you missed the performance show you can read our full recap here!

In the bottom three last week were Elise Testone; Shannon Magrane and Ericka Van Pelt.  It doesn’t take long for Ryan to reveal that Elise is safe, Erika was then safe and Shannon sang for her life  in hopes that the judges would use their save for her.  They decided not to and we had to say goodbye to Shannon Magrane.  If you missed the result show you can read our full recap here!

The competition is getting fierce and on tonight’s show the #idol Top 10 will be mentored by Diddy who will be working with Jimmy Iovine!  The remaining contestants will take on the songs of Billy Joel tonight.   Haley Reinhart, returns on the Thursday results show to perform LIVE! Lana Del Rey will also perform on Thursday’s show.

RECAP: The show starts with contestants in tears, they are the final ten and it’s their reaction to having lost more hopefuls last week. It’s another week of tough competition, things are heating up. The theme tonight is Billy Joel and Steven says if you can’t sing his songs, you just plain can’t sing. The contestants are listed below in order of appearance.

1. Deandre Brackensick is first and Tommy Hilfiger starts by giving him styling advice; take the hair down is a first. Jimmy and P Diddy are mentoring this week, first thing Jimmy tells Deandre is to smile.  DeAndre is singing “Only The Good Die Young”. I didn’t like it, he needs to learn how to dance.

Steven said, “I thought it was a little too happy at first, but isn’t that what the world needs”. Jennifer said, “I thought he had a good vibe, it was a good mix and showcased who he is”. Randy said, “I wasn’t jumping up and down, it was good job, but it didn’t wow me”.

2. Erika Van Pelt is next, she chooses to sing “New York State Of Mind”. P Diddy tells her to tone it down a bit and be a New Yorker, she has to get raw and show she has guts. Tommy Hilfiger asks her whose style she likes and she says Pink. Hilfiger doesn’t like her hair cut and suggests that she cuts it. OMG, she went from blond to black with a purple shine, somehow it looks good on her. Love the look, but I didn’t like the song choice for her.

Steven said, “just nice, outstanding”. Jennifer said, “that was really beautiful, I love the hair, it’s a Pat Benatar vibe, you let loose and took us home”. Randy said, “first of all, I love the look, it’s so different and I love the vocals. That was beautiful, go ahead and wear us out at the end of the song because you’ve got that”.

3. Joshua Ledet meets with Tommy Hilfiger first and tells him that he has choose to wear all black but Hilfiger wants him to kick it up with a tux, by looking clean and polished. Joshua chooses to sing “She’s Got A Way”, he goes into the mentor session discouraged, but P Diddy’s words make him feel more confident about his performance. I wasn’t crazy about it, but he looked great.

Jennifer said, “I feel stupid to say anything negative, I just needed to feel that you were connected more to the lyrics”. Steven said, “I think that you took a song that I didn’t know, you sang your life into it and make it come to life with your soul”. Randy said, “with a voice like yours never feel defeated, always jump in a grab that and make it your own, it was kind of a half half thing for me”.

4. Skylar Laine is at her mentor session and a little star struck by P Diddy, she chooses to sing “Shameless”. P Diddy thinks she is forcing, over compensating but once she calmed down he felt he was in church. Off to meet Tommy Hilfiger, he wants her to evolve her look without abandoning her boots. I didn’t like her dress, but surprisingly, because she is not my favorite, she sang really well.

Randy said, “it took you a bit to get into your comfort zone, it was pretty good but not your best”. Jennifer said, “you go into every song and you eat it up”. Steven said, “a little pitchy but you still breath life into a song”.

5. Elise Testone fights back from two weeks in the bottom three, this week she chooses to sing “Vienna”. Jimmy tells her that he is really surprised that she chooses a song that not that many people know. P Diddy tells her to start on her mic, then take it off and have fun. Tommy Hilfiger found her to be very layered up, she admits to him that she loves the 70’s. Wow, what does Jimmy mean by people don’t know this song, I’ve heard it before and I wish she had done a better job, her voice is too scratchy for me. It will certainly be interesting to see what America thinks. The judges give her a standing ovation and since Ryan has the show running fast tonight, he invites two of her students on stage to give her hugs.

Jennifer said, “I’m so happy for you, how confident you were, everything was great”. Steven said, “that melody was so fantastic, your song and your dress were beautiful”. Randy said, “I like what you guys have done tonight, you are unbelievably talented”.

6. Phillip Phillips meets up with Tommy HIlfiger first who declares that he needs help, style wise. On to his mentoring session, he chooses to sing “Movin Out”. P Diddy tells him to lose the guitar and take some risks.

Steven said, “you took that song and filled it full of sick, it was beautiful, I was happy that you didn’t lose the guitar and this scarf might help you (he throws his scarf to Phillip) Jennifer said, “it comes down to you have to be who you are, it was awesome”. Randy said, “Hilfiger told you not to wear grey, you wear grey on grey, P Diddy tells you to lose the guitar, you don’t. I said it before, those that do, should, you are an unbelievably talented artist, stick to your guns, it was brilliant”.

7. Hollie  Cavanagh sits with Hilfiger and he agrees with Jimmy that she was dressed too old for her age last week. She tells him that she wants sparkles, he promises to deliver this week to make her feel like a real star. Hollie chooses to sing “Honesty”, P Diddy tells her to watch her tones and helps her put the song into perspective. She’s wearing a pant suit, it’s nice but still too old of a look in my opinion.

Steven said, “tonight you were a little pitchy, like you didn’t sing it enough”. Jennifer said, “you take on these big songs, your voice is one of my favorites, don’t distract us by going off”. Randy said, “we give you constructive criticism because we know you were great, tonight your versus were not good, you have to let go, but you looked great tonight”.

8. Heejun Han is feeling that it is tough after listening to all the criticism last week. P Diddy tells him to put his ego away and learn from it. Jimmy tells him to use it as fuel, or walk away. P Didddy is wondering if Heejun is an actor, Asian or maybe he’s black! Hilfiger asks Heejun who he looks up to for fashion and he says Jessica Sanchez? He chooses to sing “My Life”. Heejun comes on stage in a black tux, singing the song slow. It didn’t take him long to ditch the tux and kick up the song. I thought his idea was good, but it went a little too far and his vocals were way off. I think he may be going home tomorrow night.

Jennifer said, “I loved that you brought a little fun to the show tonight, you didn’t hit the vocals as much as you would have liked to, it was a lot of fun”. Steven said, “Hee man, you know, I am a little tongue tied. Are you happy you took the piss out of that song? The music industry will kick you in the ass, you have to take it more seriously”. Randy said, “even though your vocals were off, I am happy you had a good time”.

9. Jessica Sanchez is a huge fan of Tommy Hilfiger, she shows him a dress and tells her that she should shorten it up a bit. Jessica chooses to sing “Everyone Has A Dream”. P Diddy tells her that he doesn’t believe in the song, he thinks she is over singing it with tricks. Jimmy tells her to sing the song to P Diddy, he believes her now and thinks she is a star, she just needs to pay respect to the song. Great voice, standing ovation by the judges.

Randy said, “what I’m loving that it’s takes consistency to win and you have it, you are flawless and perfect, excellent mentoring, that was perfection”. Steven said, “when God was giving out vocal chords, you were so at the beginning of the line”. Jennifer said, “that was a defining moment for me, it was a beautiful thing”.

10. Colton Dixon tells Hilfiger that he want to create his own style, punk rock with a mix of military. Hilfiger thinks they need to do something with his hair. Colton choose to sing “Piano Man”. Jimmy thinks the song is made for him, P Diddy wants to buy his record, he said he’s looking at Colton like he’s an artist.

Jennifer said, “you sing with pure feeling, I had goosies from head to toe, Diddy gave you the biggest compliment saying he would buy your record”. Randy said, “I loved when you told Tommy you wanted to be an individual, you made it simple, I love the voice, I love the hair, you are a rock star”. Steven said, “you choice of chords was amazing, you are a great singer”.

That’s it for tonight, Jessica and Colton are certainly the winners tonight, I think Heejun or Deandre is going home.

Tomorrow night we will be live blogging the results show, don’t forget to come back to find out who is going home?