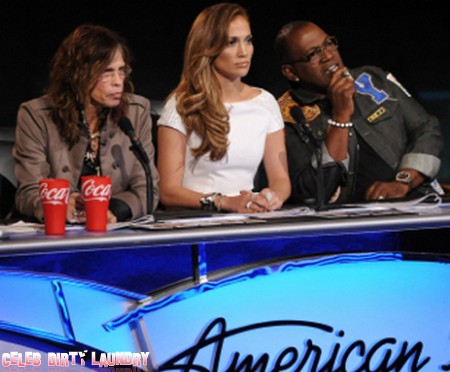 Tonight is another American Idol result show and after tonight we will lose another competitor and we will be down to our Top 11.  Or  so we think we will be, last night Ryan did not exactly say that someone was going home he said someone might be at risk of going home.

So in light of the fact that Nigel and Ken cornered Jermaine Jones in the back room about his criminal record last night. They listed his crimes and gave him a good lecture.   Jermaine claimed that he was scared and nervous and thought that he would be penalized for his past.   Nigel advised Jermaine what already knew, they have no choice but to let him go, it’s the end of the road.  So perhaps they may not eliminate someone on Idol tonight.  If you missed last night’s episode you can catch our full recap here!

On the results show night Chris Daughtry will return to Idol to perform ‘Outta My Head’, the third single to be taken from the band’s third album Break The Spell.  There will also be a performance by Demi Lovato.

Do you have any favorites?  Who are you rooting for?  Sound out in the comments below and let us know.

RECAP: Tonight the show opens up with Ryan Seacrest reminding us about Jermaine Jones’ shameful arrest warrants. He goes on to promise only “the outcome of your votes” and not an elimination. Ryan then says that they are going to reveal the top 10 tonight, my bet is that Heejun or Skylar is going home.

Tommy Hilfiger is going to be this season’s Image Advisor. Tommy makes reference to Adam Lambert as an “Idol” veteran who understands Hilfiger’s image. “I should have them transformed by the time they hit that stage,” Tommy promises us.

Phillip Phillips, Skylar Lane, Elise Testone and Joshua Ledet are called up on the stage.  Jimmy says Phillip went far beyond the call of duty, he also comments that he didn’t think Skylar’s song suited her.  Joshua is safe. Phillip is also safe. But either Elise or Skylar is in the Bottom Three. Ryan calls it, Elise is in the bottom three.

Time for (yawn) Demi Lovato, she looks like an 1980’s rocker, her performance is ok, but fans are just itching to find out who is going home.

Ryan is ready to call more hopefuls on to the stage, up goes Colton Dxon, Shannon Magrane, DeAndre Brackensick and Jessica Sanchez. Jimmy thinks that DeAndre may be going home tonight, hey, didn’t he pick the song for him last night? Jimmy chooses not to through Jessica under the bus even though her song really didn’t suit her.

Colton is safe, Jessica as well. OMG, DeAndre is safe, now that’s a shocker. This puts Shannon in the bottom three.

Time for more terrified contestants to find out their fate. Erika Van Pelt, Heejun Han and Hollie Cavanagh are on stage. Jimmy loved Hollie and let’s us know about it, on the other hand he doesn’t think Heejun has long on the show. Hollie safe and so is Heejun.

It’ doesn’t take long for Ryan to reveal that Elise is safe, Jennifer is happy and so is Steven because they didn’t think she belonged in the bottom three. Erika is safe and now Shannon is singing for her life tonight in hopes that the judges will use their save for her. Will the judges use their only save for the season? NO!