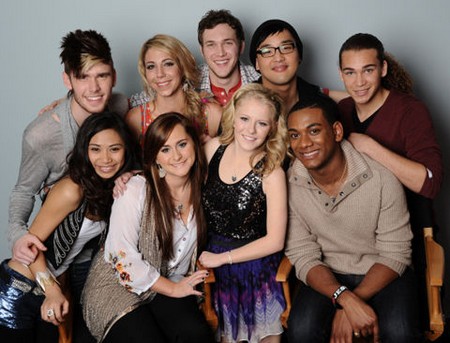 American Idol 2012 is back tonight and we have our top 9.  Stand by as we live blog the show with all the up-to-the-minute details.  On last week’s episode  Erika Van Pelt sang her heart out for survival, but the judges decided not to save her and she was eliminated.  If you missed the episode you can read our full recap of the result show here and our full recap of the performance show here.

The mentor this week will be Fleetwood Mac singer/songwriter and solo artist Stevie Nicks – the Official American Idol twitter account tweeted: “Stevie Nicks is this week’s mentor! As the lead singer of Fleetwood Mac, she is a pioneer of rock & roll music.”  Colton Dixon also tweeted about his meeting with Nicks, tweeting, “Morning everyone! Stevie nicks was our mentor yesterday and she was the sweeties thing! Got a great song coming your way this week:-)”

The contestants are expected to be singing songs from their idols and some of the artists they are taking on are: Beyonce; Mariah; Miranda; Lifehouse; Daughtry and Led Zeppelin.

TONIGHT’S EPISODE:  Singer: Colton Dixon Song: “Everything” by Lighthouse (SEE THE VIDEO OF HIS PERFORMANCE HERE)

Colton is amazed that Stevie Nicks knows who he is and Colton is very into Jesus tonight – very nasal but also intense.  All the religiosity makes Colton think that the judges won’t dare say anything bad about his performance.

Judges J-Lo, Randy and Steven: “You are a dream come true for a judge on ‘Idol,'” Steven Tyler says. “What a way to start the show. It was so emotional,” J-Lo follows. “I believe you and every song you choose and every lyric,” according to Randy, saying that Colton doesn’t hide it. “That performance was unbelievable,” Randy adds, noting that there are nine people left and Colton wants to win. “He wants to win! He wants to win!” says Randy.

Colton starts to cry, calling this his favorite worship song. J-Lo is crying with him. Ryan promises that Skylar is going to “show off her sassy side.”

She is too young for this number…

Steven, J-Lo and Randy: J-Lo likes the energy of Skylar and thinks it was a perfect song choice. “Skylar, that was over-the-top,” Steven says and calls beautiful.  Randy too was pleased and calls Skylar “a powerhouse singer,” though he says Skylar should have told more of the story of that is the song.

Steven  Say: “That was most excellent,” Steven says.  J-Lo and Randy don’t judge since it was not a performance that was judged.

Singer: Heejun Han  Song: “A Song For You” by Donny Hathaway

Heejun is really serious this week…  he has God on his mind!

Steven, J-Lo and Randy: The judges give Heejun a standing ovation.  “You did it. You turned it around,” says Steven – “He is here because we know he can sing that way. That is the most beautiful tone, the most beautiful vibrato,” J-Lo praises.  Randy is less impressed but still positive. Heejun gets emotional and says he doesn’t want to let his kids down… playing the family card –good move!

She sings her heart out – but is it enough?

Steven, J-Lo and Randy: Randy starts off and says that she well but a few mistakes – he knocks her lower range and the audience boos him.  J –Lo thought this was one of Hollie’s best.  Steven was not thrilled and thinks the song choice was poor – he says that she did just alright, just okay.

This dude is a falsetto fraud – he sucks

Steven, J-Lo and Randy: “100 percent passion,” Steven raves for no good reason. “To me, you have one of the most special voices in the competition,” J-Lo says, yes – very special… and then Randy chimes in: “That’s who you are and what you should be.”

Great singer – a real pro, so to speak – this lady should go far

J-Lo, Steven and Randy: “It was a really, really beautiful rendition,” J-Lo praises saying Jessica left her wanting more. “I think you’re a star no matter what,” Tyler says. Randy appreciates amazing talent and says, “I think you’re one of the best singers I’ve heard in many years.”

The next trio is Heejun, Joshua and DeAndrea with a medley of Michael Jackson songs. Songs are “Lady In My Life”, “I Wanna Rock With You”, and ”I Want To Love You” – Good job all around.

This is the standout performance of the night so far – like the guy is in a class by himself – everyone else just go home now… even the judges are standing!

J-Lo, Steven and Randy: “We’re standing up too much tonight. It’s crazy,” J-Lo says. “I feel like every song you sing, you own,” Steven says. Jonny Lang and Randy are friends and Randy blurts out: “I love you.” Needless to say Mr. Philips has filled us all up – in a nice way!

Singer: Joshua Ledet Song: “Without You” by Badfinger

Joshua ends his great performance in tears – and the judges stand in admiration and respect.

She is killing it a totally awesome performance – Standing ovation!

J-Lo, Randy, Steven: She made Robert Plant proud tonight according to Steven. “That was some real rock star stuff,” J-Lo applauds and Randy is pleased that everyone has done so well tonight and Elise was just fine…