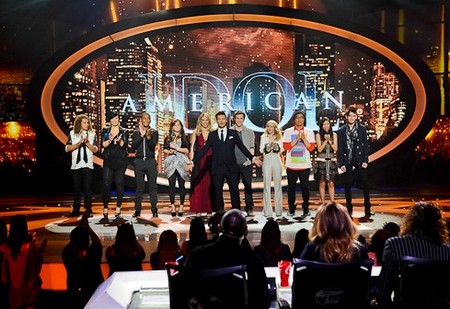 Tonight is another American Idol result show and after tonight we will lose another competitor and we will be down to our Top 9. On last night’s show the contestants sang songs from 80’s icon Billy Joel’s songbook.  Sean “Diddy” Combs was a guest mentor on last night’s show and offered his guidance to contestants.

Tonight either DeAndre Brackensick; Hollie Cavanagh; Colton Dixon; Heejun Han; Skylar Laine; Joshua Ledet; Phillip Phillips; Jessica Sanchez; Elise Testone; or Erika Van Pelt will be sent home.  Because there were two eliminations last week there is also a chance no one will go home tonight.  If you missed last night’s performances you can see all the performance videos here!

Tonight for the results show American Idol will welcome back last season’s second runner-up, Haley Reinhart, who will be performing “Free.”  Lana Del Rey will also perform and will sing her new single “Video Games.”

RECAP: The show kicks off tonight with the top ten performers singing “The Longest Time” by Billy Joel. My bet is that Heejun Han is going home, not only were his vocals bad, but was so was his attitude. The nine contestants who go on tonight, leave Hollywood and move into the mansion.

The first three called up to the stage are Hollie, Skylar and Elise. The judges and the mentors were in favor of these three last night, so my bet is that they are all going to be safe. It’s Steven Tyler’s birthday this weekend, so to surprise him Aerosmith guitarist Joe Perry comes out and plays Happy Birthday on his guitar while the remaining idols and the audience sings. Tyler’s daughter Liv is in the audience and he is genuinely touched by the whole thing.

DeAndre, Joshua and Jessica are next. Jimmy thinks DeAndre could be in danger because he was jumping all over the stage too much and he wasn’t that much impressed with Joshua either. Thank goodness out of these three, at least Jessica brought it home and according to Ryan, even Billy Joel liked her rendition.

Heejun, Phillip, Colton and Erika are called up next. Colton is going no where, he’s a “rock star”, Billy Joel emailed Jimmy last night and told him that Colton did a great job. Steven was pretty angry last night and Jimmy felt that Heejun disrespected the whole show and gives him a “D”. On the other side of this, Heejun promises something crazier if he makes it through to next week.

Erika Van Pelt is in the BOTTOM THREE

DeAndre Brackensick is in the BOTTOM THREE

Heejun Han is in the BOTTOM THREE

There is the bottom three, who is going to go home? I definitely pick Heejun, he doesn’t deserve to be on the show, I love his sense of humour, but there’s funny and then there’s disrespectful. Heejun was disrespectful last night and even Jermaine Jones deserves to be there more than Heejun.

Ryan announces that once contestant is safe and can go back to sit down, it is DeAndre Brackensick. The person that is in danger of going home is Erika Van Pelt, OMG, I can’t believe Heejun Han is safe.

Erika sings her heart out for survival, but the judges decide not to save her.