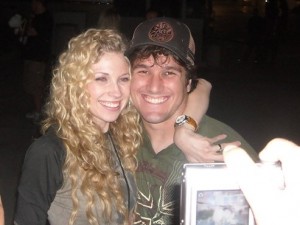 American Idol’s Brooke White is no longer pregnant. The season 7 finalist and her husband Dave Ray gave birth to a beautiful baby girl (named London Ray) on May 24th in California. How exciting! We cannot wait to see the baby photos.

The couple, who have been married for eight years, named their baby girl after the city in England where Ray’s family is from.

Back when they announced their pregnancy back in January, White told People, “We’re so excited. By the time the baby’s born, we’ll have been married eight years. I met Dave when I was 19 years old and we’ve been together a really long time, and we’ve always wanted to be parents.”

Brooke wrote the following on her blog Brookie Babble, along with a slew of pregnancy baby bump photos, “The doctor doesn’t think we’re gonna make it to that May 31st… and while I will spare you the details, apparently surprising and swift significant progress is being made. I’ve been walking, and contracting, and peeing, and making lists and finishing projects and vacuuming, wondering over and over “is this it?” and “what was that?!” and freaking out a lot because I have never done this before, and I don’t know what to expect (even though yes, I have read “what to expect when you’re expecting”) and I guess I’m very scared of pushing this wonderous eight pounder through, and simultaneously thinking I’m so not ready for this and yet so very ready for this and want to see her now, but just need to fold some towels first! And I just keep thinking… I am having a baby!”