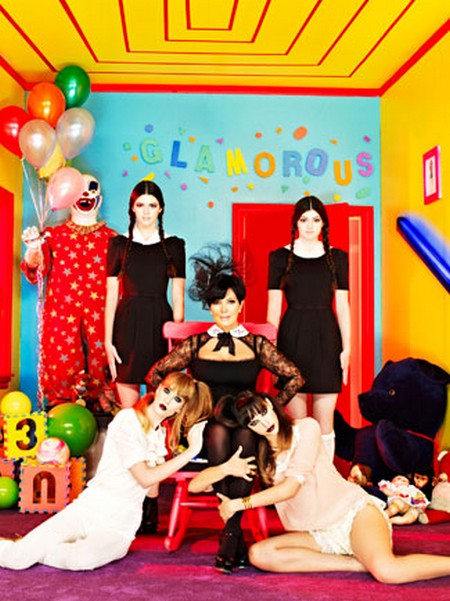 A new episode of the CW’s hit show America’s Next Top Model airs tonight  It is the second episode of the British Invasion and it is makeover week. Stand by as we live blog the show with all the up-to-the-minute results.

London model Jasmia Robinson became the first casualty of the new season last week when the judges decided she hadn’t fully embodied John Lennon in her photo.  If you missed the episode you can read our official recap here.

On tonight’s episode of America’s next Top Model  Kris Jenner is the guest star gets her two daughters Kylie and Kendall Jenner placed in this week’s fashion shoot.  Funny thing  is the girls are dressed like  Wednesday from The Addams family.    I think that Kris Jenner believes she looks like Morticia – WRONG!!!!  If anyone looks like Morticia it is Kim Kardashian.

Official CW Synopsis: IT’S MAKE-OVER TIME AND REALITY STAR KRIS JENNER IS THE GUEST JUDGE – Some of the models resist getting make-overs and a few of them are unhappy with their new looks. The women take part in an unusual photo shoot where they have to model as toddlers while posing with Kris as well as her daughters Kendall and Kylie. Kelly Cutrone and Nigel Barker join guest judge Kris Jenner and Tyra Banks on the judges’ panel for elimination.

Tonight’s Episode:  The American women are feeling very confident because the Brits were the first to go home.  But the Brits have not intention in rolling over and going home.

The usual thing that happens each season – some girls cooperate and other cry and lots of drama.  The ladies go the famed Sally Hershberger salon.   Sally comes and tells the girl it is not makeovers it is shakeovers.  Since Azmarie only had to have a design in her scalp she helped giving the ladies hair washes.

Louise is really upset they have chopped all her hair off.  They now want to dye her hair darker and she is not into it.  Mr. Jay is trying to convince her but she is not pleased.

Louise is absolutely refusing to go darker.  Finally she lets them do it and now she thinks she is the most powerful person in the competition.

The British girls don’t want another Brit to go home.  Sophie decides to try and psyche the American girls out and tells Eboni that three of them have the same haircut.

They go into the room and there is a challenge and their are 2 tables set up.  There is one table with food from the US and the other with foods from the UK.  The UK models have to eat the American food and the British girls have to eat US food.  On the US team they made Symone eat the Haggis for them – she was just stuffing it down and the British girls were amazed.  The American girls won thanks to Symone!!

Candace and Symone get into a big of a tuffle because Symone ate the Haggis for the US team and Cadace made fun of her.

The Brits are laughing because the US team is tearing each other apart with fighting and bickering.

The ladies get Tyra mail and it tells them that tomorrows photoshoot will make them feel like a kid again.  The girls head to Siren studios in the heart of Hollywood.  He tells the ladies they are meeting with the ultimate MoManager Kris Jenner.   Mr. Jay tell the models that Kris is the queen of marketing.

Today the models are going to pose as children – Kris’ children – The Kardashian’s meet the Addams family.  To top it all off the girls are told they are going to model with Kendell and Kylie.

After the photoshoot – the ladies get Tyra mail they will meet with the judges tomorrow.  Sophie thinks that the US girls do not want it as much as they do.

Symone looked beautiful in the shoot but there was a spark missing according to Mr. Jay, they do not like the shot – Annalyze – they are not digging her shot.

Louise – the face is dynamite but there is a lack of charm. Alicia – Kim says they were great.   The judges think they are too sexy.  They feel she did not know what to do with herself.

Sophie – they loved her face but not her body.  They feel her shot was the weakest.  Lauren they thought was fantastic, Catherine they loved her elegance – Nigel feels this is his favorite shot.

Kyle -they felt she was a little too conscious on the set and no personality & Mariah – had a lot of energy on set but the shot is too sexy.

Candace they loved the shot of her – Eboni – Nigel feels his eyes go right to her.

Ashley – They loved Ashley’s shoot they felt she elevated herself.  & Azmarie looked awkward and they did not feel she brought it.  The judges are really disappointed.

RUNNER UP FOR BEST PHOTO – ASHLEY