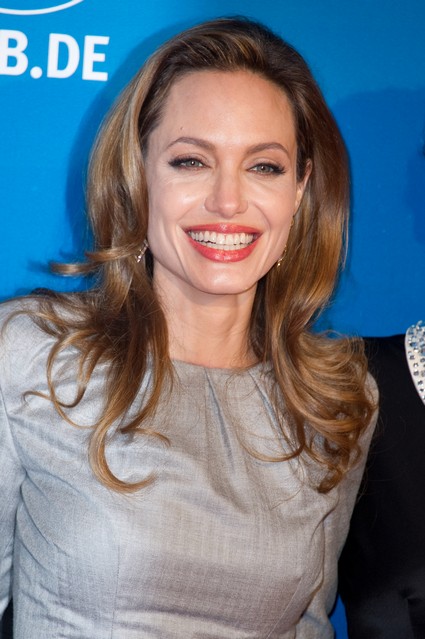 Angelina Jolie has walked into dangerous territory and upset Brad Pitt by writing the foreword to her ex-husband Billy Bob Thornton‘s new memoir, The Billy Bob Tapes: A Cave Full of Ghosts. This move on Angelina’s part confirms that she is getting serious about her relationship with her ex and justifies Brad’s misgivings. Brad has been distraught over Angelina’s renewed interest in Billy Bob and was reported last week to have left a restaurant in tears after a the couple had an argument.

We reported here at Celeb Dirty Laundry that a broken-hearted Brad ran out of the Berlin restaurant in tears after Angelina callously revealed her plans to reunite with Billy Bob. Brad had been gallant enough to fly to Germany to squire Angelina to the February 11 premiere of her critically acclaimed film, In the Land of Blood and Honey, at the Berlin International Film Festival. But Brad got quite the slap in the face when he learned that Angelina was planning to hook up with Billy Bob, who was at the festival for his film Jayne Mansfield’s Car.

Now a representative for Billy Bob’s publisher, HarperCollins, has confirmed to Us Weekly that Angelina has written the foreword for Billy Bob! This will no doubt send Brad into fits of rage.

Us Weekly had this to say: Jolie, 36, and Thornton, 56, were married from 2000 to 2003; during their intense, sometimes odd union, the couple famously wore vials of one another’s blood around their necks. Jolie and Brad Pitt have been together (but not married) since 2005. Married five times overall, Thornton and makeup artist Connie Angland have been in a relationship since 2003.

“We talk every now and then,” the Faster actor said in late 2010 of Jolie. “She seems to be doing very well directing her own movie [In the Land of Blood and Honey], which I am so proud of her for. She’s real smart, and very creative, and I think it’s a great job for her.”

Cowritten with country music singer and author Kinky Friedman, The Billy Bob Tapes promises to tell, according to book description info on Amazon, “colorful tales of his modest (to say the least) Southern upbringing, his bizarre phobias (komodo dragons?), his life, his loves (including his heartbreakingly brief marriage to fellow Oscar winner Angelina Jolie), and, of course, his movie career.”

Angelina insists on a complete double standard in her relationship with Brad. She is footloose and fancy free while Brad is not allowed to even glance at another woman. Angelina is a jealous fiend when it comes to Brad and yet thinks that she can do whatever she pleases.

Will the time come soon when Brad tires of Angelina’s antics and moves on? Do you think that Angelina would tolerate Brad writing the foreword for Jennifer Aniston’s autobiography?