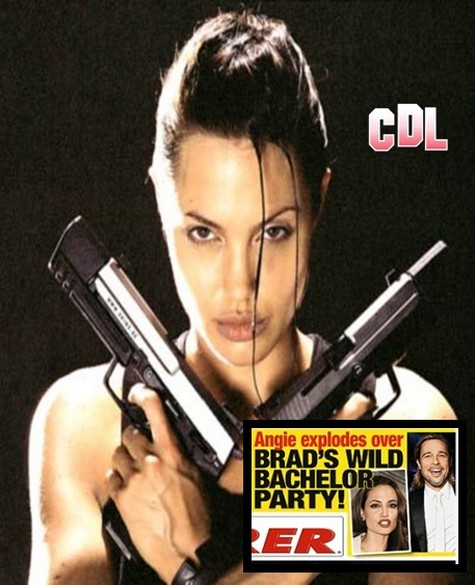 Angelina Jolie enjoys her freedom and exercises it at every opportunity but she is very jealous and possessive of Brad Pitt.  Since they became formally engaged in April Angelina had kept Brad on a short leash – after all she knows that he can be vulnerable to younger flirts.   Isn’t that exactly how she stole Brad – sleeping with him as the two filmed Mr. & Mrs. Smith while he was still married to Jennifer Aniston?  Of course now that Jennifer and Justin Theroux are also engaged, and Brad has offered them congratulations, one would think that Angie would allow him a little slack.

But as The National Enquirer reveals on the cover of the current issue Angelina lost her mind when she learned about what George Clooney and the boys had planned for Brad!  According to reports, Angelina and Brad are about to be married at their French estate so this bachelor party presents Brad with one final opportunity to have some unfettered fun.  But instead, Angelina donned her Maleficent costume and played the evil witch, a role she takes to so naturally.  No fun for Brad – not while Angelina can stop it!

The Enquirer also exposes the details behind Randy Travis’ crazy drunken arrest last week. Apparently Randy Travis’ father, Harold Traywick has lots to say about his wayward boy – including the rather cold: “He can stay in jail for all I care!”

A frantic 911 call from a “spooked out” driver alerted cops to the strange sight near the “Forever and Amen” singer’s Tioga, Texas, ranch shortly before midnight on Aug. 7.

An exhaustive ENQUIRER investigation traced Travis’ steps leading up to the incident, and sources revealed it wasn’t just alcohol that contributed to the wreck and his bizarre behavior – both before the accident and afterwards.

We also talked with Randy’s dad Harold Traywick, who elaborated on the forces that led to his troubled son driving his 1998 Pontiac Trans Am off the road and through several barricades – and eventually landed him in the Grayson County Jail on charges that could send him away for 10 years.

To get at all the details of Angie’s meltdown and Randy’s binge we’ll need to read the print edition of this week’s Enquirer.  No doubt they have much to tell us.  Do you think that Angelina Jolie has a double standard when it comes to fooling around?