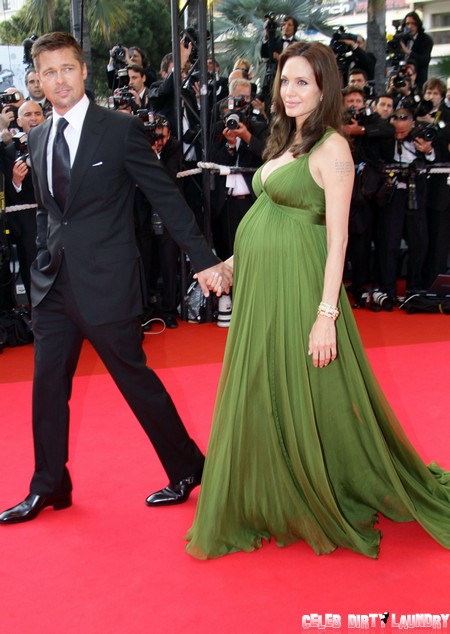 Angelina Jolie has finally decided that she needn’t remain looking like a starving fawn in winter any longer.  Right now Angelina weighs only 100 pounds at 5-foot-7 and according to reports has suffered from various eating disorders throughout the years. Hollywood’s queen plans to gain at least 20 pounds for two distinct roles she is going to play.

Firstly, Brad Pitt’s fiancée is gearing up for her starring role as the lead, of course, in Scott Rudin’s production of Cleopatra.  Angie has wanted to play the last Pharaoh of Ancient Egypt for years and according sources ‘she wants to lose her bony body and carry some curves because of all the skimpy costumes she’ll be wearing.’

Secondly, according to the GLOBE print edition, September 24, an insider reveals that ‘Angie and Brad have privately agreed to one more biological baby.’  Of course Angie understands that her chances of conceiving at a slight 100 pounds are poor, and so she intends to use the Cleopatra weight gain as an opportunity to get pregnant.

GLOBE’s Shelby Loosch has an insider who says about Angelina, ‘She’s going on a special diet and exercise program to help her bulk up. Once she’s finished shooting the movie (Cleopatra) and doing her promotional tour, she’ll concentrate on getting pregnant.’

Do you think that Angelina needs more kids? She has 6 already – Maddox, Pax, Zahara, Shiloh, Knox and Vivienne. Does she really want to go through another pregnancy and childbirth at almost 40?  What do you Dirty Launderers think? Let us know in the comments below.