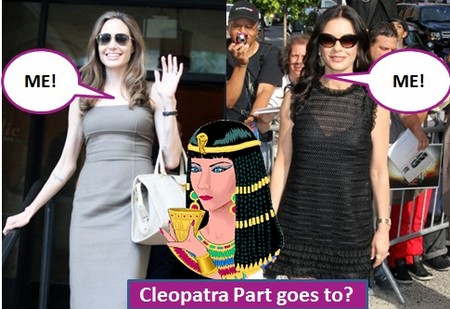 There is an ugly battle brewing in Hollywood between two A-list Oscar-winning stars – and the combatants are Angelina Jolie and Catherine Zeta-Jones! The rivalry between these two is set to go nuclear over Cleopatra.

Angelina is set to star in the titular role in David Fincher’s ‘Cleopatra’ and Catherine is planning to upstage her arch rival. A source says that “Catherine wants to spoil Angelina’s much-hyped casting as Cleopatra by doing what she does best –musicals. She’d love nothing better than to sabotage Angelina’s dream role with her own spoiler version of the Cleopatra story.”

GLOBE Print Edition, July 2 lays it out for us with the headline: Zeta-Jones plots to POISON Angie’s Jolie’s new Cleopatra flick – insiders say.

Hollywood is bracing for bitter battle between two of the hottest Oscar winners over who plays the better Queen of the Nile! Sultry Angelina Jolie, 37, is furious her longtime rival Catherine Zeta-Jones is secretly planning to ruin her upcoming Cleopatra movie. An insider tells GLOBE that Catherine, 42, has been working with Steven Soderbergh on a 3-D musical, Cleo, and is desperate for the film to be in movie houses before Angelina’s David Fincher drama is released.

“There’s a lot of wheeling and dealing going on,” said the source. “Angelina’s scheduled to start filming next year, while Catherine’s project is expected to get the go-ahead soon.”

The rivalry between Catherine and Angelina dates back to 2002 when Jolie, who won a Best 1999 Supporting Actress Academy award for ‘Girl, Interrupted,’ lost the role of Velma Kelly in ‘Chicago’  to Zeta-Jones.  Catherine went on to win an Oscar for the part.

Things got worse in 2006 when Catherine’s husband Michael Douglas told GQ Magazine, “I don’t know about Brad Pitt leaving that beautiful wife ( Jennifer Aniston) to go hold orphans for Angelina. I mean how long is that going to last?”

Even though Michael denied saying it, GQ stood by the quotes and the damage was done.

Catherine, who costarred with Brad in the hit Ocean’s 12 was missed missing in the sequel Ocean’s 13.

“There was no way in hell Angelina would’ve allowed Catherine to be cast in Ocean’s 13 after that,” says the Jolie-Pitt insider. “Unsurprisingly, Brad agreed.”

Let’s see what ends up happening – will Angie’s ‘Cleopatra’ get out before Zeta-Jone’s ‘Cleo?’ One thing for sure Michael Douglas should keep his mouth shut about children – he wishes he had Angelina’s orphans.  His own sociopathic son, Cameron Douglas, is totally screwed up and serving a long prison sentence for drug dealing!