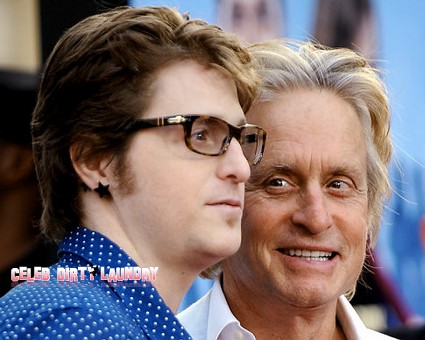 Michael Douglas‘ son Cameron Douglas has been sentenced to yet another four and a half years in prison for running drugs into jail. As we reported earlier on CDL, Cameron did not learn much from his original five year sentence… and thought he could outsmart prison officials.

Cameron, 32, was originally serving five years after he pled guilty to possession and dealing methamphetamine and cocaine in April but his time in jail has now been almost doubled after he repeatedly violated prison rules by arranging to get drugs while in custody.

When Cameron was sentenced to his first 5 years inside, his dad commented that he thought that prison ‘would be a really good learning experience‘ for his son – well with this additional sentence Michael must think his boy will come out a regular scholar.

Judge Richard Berman cited four different occasions in which Cameron’s lawyer smuggled narcotics into prison for him in her bra when announcing the extended sentence.

He also recommended Cameron be sent to a prison facility that can offer him drug treatment and mental health care.  Speaking in court, Cameron said: “I cannot seem to find comfort within my own skin. I feel ashamed. I feel defeated.”

The DJ and actor- who asked for the judge to send him to rehab to deal with the situation “medically” – has previously told the judge of a wish to turn his life around and become an “entertainer.”

He explained: “I am sorry for my family and my loved ones for putting them through this nightmare of my making.  I ask for an opportunity to be a role model to my younger brothers and sisters.”

A role model?  Is this punk totally insane?