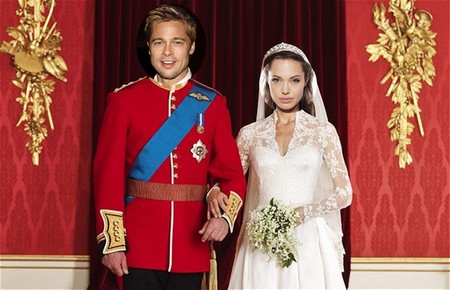 Angelina Jolie is going to be a copy-Kate. It seems the reigning queen of Hollywood is looking at England’s newest princess Kate Middleton for inspiration for her wedding to fiance, Brad Pitt.

A source told Star magazine: “Angie is fascinated by Kate, and like the rest of the world she fell in love with her and William when she watched their wedding on TV with Brad and the kids. She would never make her own wedding public and wants a private event on a much smaller scale. But she loved the Britishness of Kate and William’s big day and wants to incorporate some of those very traditional elements into her own ceremony.”

Angelina? Traditional? I buy that Brad Pitt wanting a fairy tale wedding more than Angelina. She eloped with a guy named Billy Bob. Cinderella she is not.

But apparently the reformed wild child has become mesmerized by Kate Middleton and Prince William from the grace and poise they showed with the whole world watching on their big day down to Kate’s demure yet stunning Alexander McQueen wedding dress. Naturally, Star’s source says she is looking for something similar.

“She wants to capture the feel of the fairytale princess and thinks Brad should dress formally, like a prince, too.”

I don’t think Pitt can just rent an Irish Guard uniform. Perhaps a nice Tom Ford suit will suffice instead.

I can see the Jolie-Pitt kids wanting a huge royal wedding. They’re young and I’m sure they watch a lot of Disney movies in that house. And with the royal couple’s wedding still on everyone’s mind, the kids probably have pumpkin carriages and diamond tiaras on the brain.

It’s sweet that Angelina is so engrossed with the decorum and romance of the English wedding. If she steals some small traditions than good for her but I hope she doesn’t copy too much from the royal couple. Anything she does will be special. Doesn’t she know every girl is a princess on her wedding day?