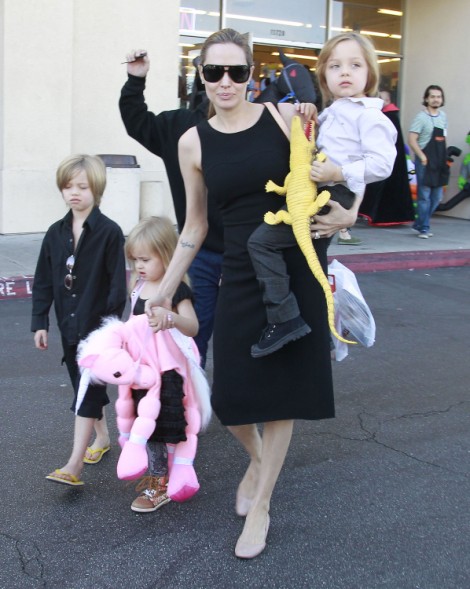 Is it a reasonable worry? Brad Pitt did (allegedly) cheat on Jennifer Aniston to be with Angelina Jolie. Once a cheater, always a cheater, right? Even with that face, even with those kids, is it safe to assume Angelina harbors those anxieties about her perfume hawking fiance?

Her dad believes it. According to the National Enquirer, Jon Voight broke down in public after hearing Angelina called off her wedding because she was “terrified Brad will cheat on her”.

“They’d been quarreling over wedding plans, and then suddenly the subject turned to women Brad was working with,” a source told the mag. “Angie’s worried that future Chanel ads will pair Brad with young, sexy model types and he’ll be tempted to stray. Her insecurity is nothing new, but her paranoia has ramped up lately because Brad has been somewhat distant. She’s always thinking he’s hiding something from her. She knows from first-hand experience that when Brad gets bored in a relationship, he looks for stimulation elsewhere. Angelina has already had several fittings for her wedding gown with designer L’Wren Scott, but now she’s put her dress on hold. Their relationship is in tatters.”

The only thing I find interesting about this whole crap story is that Angelina is leaning towards L’Wren Scott for a wedding dress designer. Why I choose to believe that little tidbit over the rest, I have no idea.

So does hyper-paranoid fit in with Angelina’ shit mother persona? How that woman has managed to stay so mysterious is so fascinating to me. But it’ll take a lot more than a National Enquirer story to make me believe Angie’s worried over Brad’s Chanel ads. We’ve all seen them. There ain’t nothing that biotch has to worry about. If anything, she’s probably calling off the wedding because those ads were so ass awful. I know it’s Brad Pitt but even I would question the love at that point.

Still… Angie… insecure? Why not? She’s human after all. But Brad cheat on Angelina Jolie? I never thought it would go that route. I’m sure a lot of us always figured it would be the other way around. We’ll have to wait and see…. Until then, Angie better call that dad of hers. He’s a loose cannon when he’s kept out of the loop. Let him hang out with one of the kids for a day and he’ll be right as rain.

Is Angelina Jolie worried Brad Pitt’s cheating? Could the old saying, “You show me a beautiful woman and I’ll show you a man who’s tired of her” apply to the Jolie-Pitts?