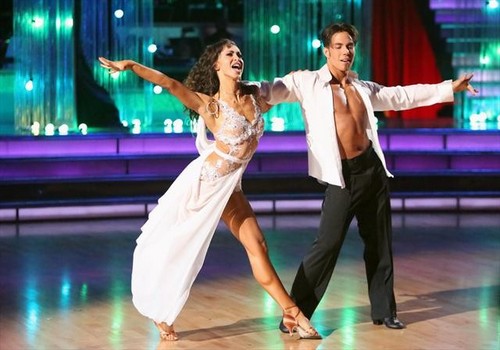 Apolo Anton Ohno and Karina Smirnoff were eliminated during tonight’s elimination episode on Dancing with the Stars All-Stars.  If you missed the results show we recapped it here for you!

On last night’s show Apolo and his professional partner Karina  danced the Big Top Jazz and the Rumba to Man in the Mirror – Apolo and Karina’s first dance was awkward and they lost their footing in the beginning. The three judges gave differing critique, with Carrie Ann calling it “really sloppy”. Len awarded 9 points, Bruno awarded 9.5 points, and Carrie Ann awarded 8.5 points. The total for their first dance was 27 – the second lowest score for the first dance, and a below average score for the season.

Their second dance, however, picked up the pace and saw them being awarded a total score. Len thought it was “fabulous”, Bruno thought they “nailed it”, and Carrie Ann said, “That’s what I am talking about, you don’t have to ever dance in this competition!” GRAND TOTAL SCORE – 57 – THE SECOND LOWEST SCORE OF THE NIGHT