Are Charlize Theron And Alexander Skarsgard Hooking Up? 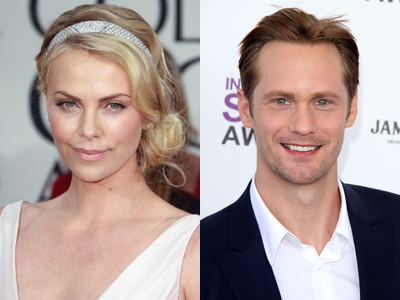 Alexander Skarsgard certainly moves on fast! Just a week after it was rumored that the 35-year-old True Blood hunk might be dating 23-year-old Hollywood newcomer Elizabeth Olsen, the National Enquirer via Celebitchy.com is now reporting that Alex and Oscar-winner Charlize Theron, 36, are having a secret romance!

Reportedly, in what seems like an attempt to keep their relationship undercover, Alex and Charlize were seen “snuggling” at a gay sports bar in West Hollywood called Gym Sportsbar. (Because nothing spells romance like being surrounded by a bunch of a butch gay men while you’re on a date?)

“They ordered two beers and went to sit on the patio,” said an eyewitness to the Enquirer. “I realized it was Charlize and her date was Alexander Skarsgard. It was clear they were a couple, holding hands and staring into each other’s eyes.

“People said hello, and they were really nice. After about 45 minutes, they left with their arms around each other and drove off in the same car.“

Supposedly, a source close to the couple revealed that they both have been “scarred by love affairs gone wrong,” which is likely a reference to Charlize’s breakup with longtime boyfriend Stuart Townsend and Alex’s last official relationship with ex, Kate Bosworth, and that “they want to keep the romance to themselves for the time being.”

“They figured no one would notice them at a gay bar,” added the source.

Unfortunately for them, someone did — so the jig is up, Alex and Chalize! All that’s left is to come up with the hybrid moniker. Alize, anyone? Related: Charlize Theron Takes Men Home But Not To Bed