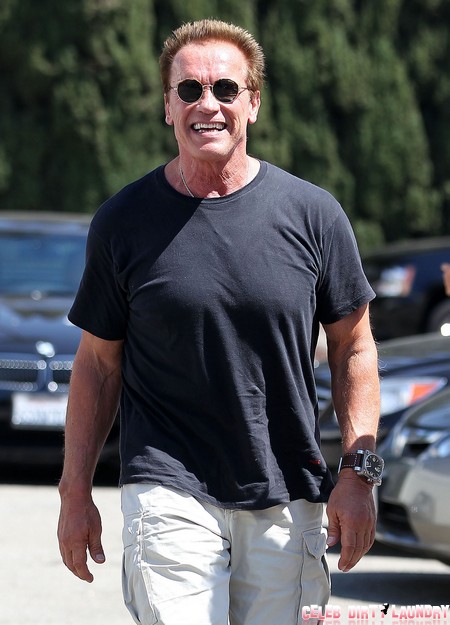 There’s a Total Recall of Arnold Schwarzenegger’s moral values, because after separating from his wife of 25 years, Maria Shriver, he told a neighbor, “I’m getting me a 20-year-old honey.” Erm, you’re 65-years-old and you speak like someone with a permanent lumbar puncture, which 20-year-old honey would go for you? According to the Daily Mail, the egotistical Arnold refused to attend marriage counseling and told Shriver to leave their house, even though he was the cheater. She demanded a divorce, to which he bluntly replied, “I have the money, the power, and the plane, and I will have the friends.” Did this bitch from Austria attend too many Scientology conventions?

According to Newsweek, Arnold has fallen so out of touch with reality that art began to emulate life, much like Arnold’s action hit Last Action Hero. He is spending his days alone in his home, while he rubs his cement face on his acting memorabilia and purrs like a kitten. His son Patrick Schwarzenegger even started calling himself Patrick Shriver, to distinguish himself from the Schwarzenegger family name. We would have done the same! Imagine how difficult it must be to pronounce a surname that sounds like it was said by a mumbling dead person?

To those Bruce Jenner people out there, Arnold had a love child with his former housekeeper named Mildred Baena (also the name for a type of boob job – Silicone Mildred). To keep a long story short, Arnold destroyed his career, family and personal life. Shriver, in all her beautiful Kennedy glory, only found out about the child when she saw Joseph Baena, the 14-year-old son Baena had with Arnold, at one of her Christmas parties. It was very “Hey honey? Should that kid be wrapped in plastic? Is he yours?”

The report states that Arnold knew about the boy for years, but kept Baena “near enough to him that she wouldn’t even think of betraying the secret.” The moment poor little Joseph was unwrapped by Shriver at said Christmas party and Arnold mentioned “it’s my kid”, Arnold started begging for forgiveness. This momentary inclusion of morals didn’t last very long. Shriver asked him to join her in therapy session, but he refused to cooperate. Arnold allegedly told a neighbor after this little incident, “I think things will work out ok with Maria, but if they don’t, I’m getting me a 20-year-old honey.” Misogynistic old fart.

Shriver didn’t last very long during the despotic reign of her mentally unstable husband, “Maria could not stay with her estranged husband. The mansion had the scent of the affair in every bed and sofa, and wherever Maria looked she saw pictures and memorabilia of her husband. And so she moved into a hotel, where her children came to visit her. She had lost her mother and father within a year, and now she had lost her marriage.”

The steel-faced Arnold is currently trying to rebuild his acting career, after appearing in The Expendables 2 – the same named action sequel with an all-star cast. According to Newsweek, “His repulsive behavior has been his undoing. [Schwarzenegger] was consumed with the incredible rush of power and prestige that was almost like an addiction. [Cheating] is part of the amusing game of life and a woman is a spoilsport if she disapproves.” Bitch, please.

Arnold and Shriver have yet to divorce, but she has officially denied that there will be reconciliation. However, we have a sneaky suspicion that this Barbarian will not be saying “I’ll be back…” anytime soon. Let us know in the comments below if you also think that Arnold is a lying, cheating freak.