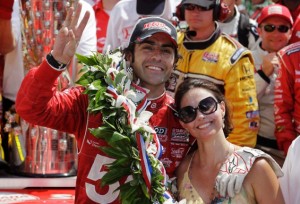 A big congratulations is in order for Ashley Judd’s husband Dario Franchitti who won the 2012 Indianapolis 500. This is the third time that the race car driver drove through Victory Lane and his wife was there to show her support for her man. I’m pretty sure Ashley shows up for nearly every race her husband is in and that is so cool that A-list Ashley is okay with exhaust pipes and sometimes downright scorching hot temperatures at the race tracks.

Of her husband’s win Judd told the press, “It’s such an extraordinary achievement. I am so proud of him.”

It was a bittersweet moment for Franchitti as he takes over the Indy 500 title from last year’s winner and his best friend Dan Wheldon. Wheldon passed away during a crash that took place at the Las Vegas 300 last fall. But Dario wasn’t going to go through Victory Lane without paying tribute to his buddy.

Franchitti honored his fallen friend by wearing a pair of Wheldon’s trademark white sunglasses after the race. And even the tough guy race car driver couldn’t hold back the tears when talking about Wheldon. Nearly sobbing as he was interviewed by ESPN, Franchetti said, “everybody loved Dan.”

Dan certainly was a fan favorite as well.

I know many of you may not know a lot about Franchitti’s background but we were able to find a little bit of information for you regarding his history. As for Franchitti’s biography, Dario was born in Bathgate, West Lothian, Scotland as George Dario Marino Franchitti on May 19th, 1973. According to his official website, Dario

formerly competed in the CART series before switching to the IndyCar Series where he was 2007 champion, and won the rain-shortened 2007 Indianapolis 500. Franchitti is also a former NASCAR driver for Chip Ganassi Racing, competing until mid-2008 when his team shut down. Franchitti returned to the IndyCar Series for the 2009 season, driving the #10 Target Honda/Dallara for Target Chip Ganassi Racing. He is the current, four-time IndyCar Series champion after claiming a third title in 2010 and fourth title in 2011 in addition to his 2007 and 2009 titles. On May 30th 2010, he won his second Indianapolis 500 race. He is the second driver in IndyCar Series history to take four titles in four consecutive series of racing, after Sébastien Bourdais, after accounting for his 2008 absence from the series.

Ashley and Dario became husband and wife on December 12, 2001, at Skibo Castle near Dornoch, in Sutherland, Scotland. So yes, they are one of the Hollywood couples who have been together for what seems an eternity by Hollywood standards.

Congratulations to Dario on his Indy 500 win!