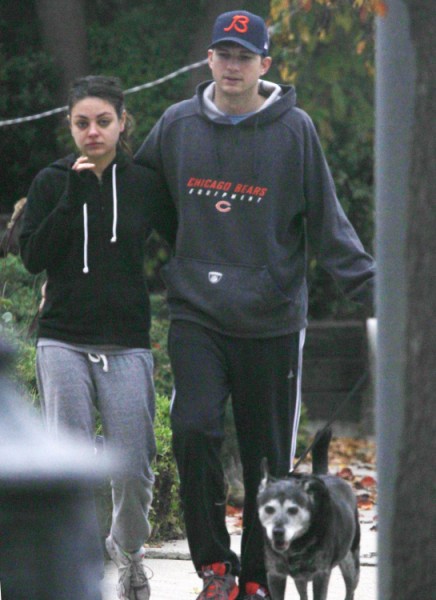 Speaking of quickie weddings leading to pregnancy speculations, why not quickie divorces? Ashton Kutcher seems to be in a dang ‘ole hurry to divorce Demi Moore all of a sudden. What’s the rush? It’s been a year. He didn’t seem to have a problem letting her wait to file first while he was off kissy facing with Mila Kunis all over the globe. But now there’s this undeniable insistence. Now those divorce papers mean something. Could Ashton be ready to marry Mila Kunis in 2013?

That’s what the National Enquirer (and just about everyone in America) seems to think. Ashton ruined Demi’s holiday season because he wants to put a ring on Mila’s finger before he knocks her up because his new wife has to be an honest kind of woman and all. Who knew Ashton Kutcher had such morals? The magazine also reports that Mila got on Ashton to make this all happen and told him she’d cut him loose if this dragged on any longer. Well, if that won’t make a guy jump I don’t know what will.

I’m not sure how I feel about this story. More or less it’s probably true but I just can’t side with Ashton and Mila because I can’t get over the nasty feeling that Ashton’s the douchiest of all douches. Kids seems to have been the issue with Demi, right? They both wanted kids but it didn’t work out so instead of adopting or taking it like a man, Ashton acted out and screwed around behind her back, inviting her to divorce him. He couldn’t just tell her he wanted out. He had to embarrass her into letting him go. So now he’s got this hot young piece ready to make babies. I know it’s old news and Demi hasn’t helped herself but I can’t help but continue to feel sorry for her. Trust me, I know that’s the least thing she needs!

Is Ashton Kutcher divorcing Demi because he wants to get married again? Do you believe Mila is pushing it? Can we blame her?