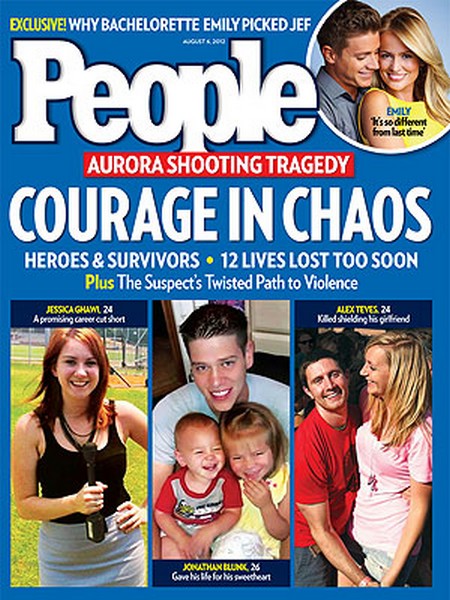 Nearly a week after James Holmes opened fire in that Aurora, Colorado Movie Theater we’re starting to learn more about the victims and survivors of the worst shooting spree in U.S. history. This week’s People Magazine has a cover story on some of the people whose lives are left permanently changed by the tragedy.

Alex Teves is one of the twelve victims.  As the gunman opened fire, Teves instinctively lept from his seat to shield his girlfriend, Amanda Lindgren, from the hail of bullets.  When it was all over Teves was dead from a bullet that surely would have hit his girlfriend had he not been her hero.

“He would do anything for me, and he did.He saved me. He was my angel.”  Lindgren, 24, tearfully tells PEOPLE in its new cover story.

Like Teves, two other men, Matt McQuinn, 27, and Jon Blunk, 26, also died as they took bullets for girlfriends. Then there’s young Prodeo Patria, who at 14 and with a bullet in his back, helped another man to safety.  Patria is expected to make a full recovery.  Then there was Jessica Ghawi, the aspiring journalist who escaped a Toronto food court shooting just one month ago, only to lose her life in Aurora.

This issue of People includes the latest information on the investigation at press time, but it is determined to focus on those that matter most in this tragedy. It makes the victims real and human by introducing us to those that love and will miss them the most. Pick up the new issue of People Magazine to read this compelling cover article.