Baby Announcement: Another Kardashian Female On The Way! (Photo) 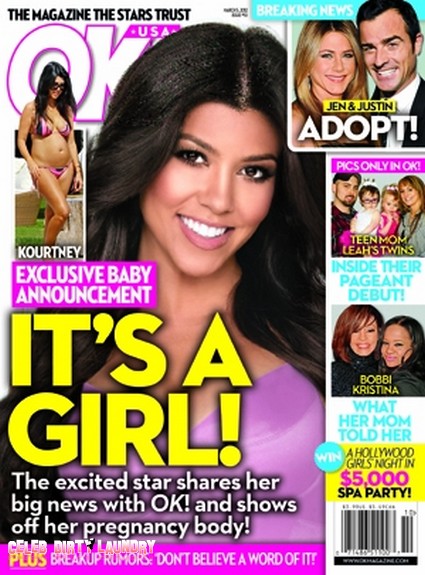 The current issue of OK magazine features the cover story ‘Exclusive Baby Announcement! Kourtney Kardashian is having a girl!’  This must be exciting news for Kourtney Kardashian and her man Scott Disick since they already have a little boy together named Mason.   A little baby girl will give grandma Kris Jenner and single sister Kim Kardashian someone to spoil and love.   Meanwhile this must be making Khloe Kardashian jealous as she and husband Lamar Odom remain childless.

From the OK Mag cover:  Exclusive Baby Announcement! Kourtney Kardashian is having a girl!  The new bundle of joy will join Kourt’s growing family with boyfriend Scott Disick and son Mason!  The excited star shares her big news with OK! and shows off her pregnancy body.  Plus! Breakup rumors: “Don’t believe a word of it!”

We are sure aunts Kim Kardashian, Khloe Kardashian Odom, Kendall and Kylie Jenner, and uncle Rob Kardashian can’t wait to spoil this little baby. And don’t forget about grandparents Bruce and Kris Jenner!

But all that glitters might not be gold since Scott is up to his old tricks partying and flirting – basically behaving like a single stud, not like a man about to be a father of two. This is nothing new since rumors have been circulating for a long time that Scott was a real bad dog. Kourtney has hoped that a second baby would make Scott grow up but that does not seem to be happening. Scott continues to party and enjoy the high life making it pretty clear that the only reason he is around Kourtney is for her fat bank account.

In fact sources claimed recently that Scott had abandoned Kourtney and went on to claim that he and Kourtney have not had sex in four months so he has turned to other women. Reportedly Kourtney retaliated by cutting off his cash and telling him to stay away from their son Mason.

Only time will tell – but our guess is that Scott will follow the money and remain an obedient dog, something Kris Humphries just couldn’t manage!