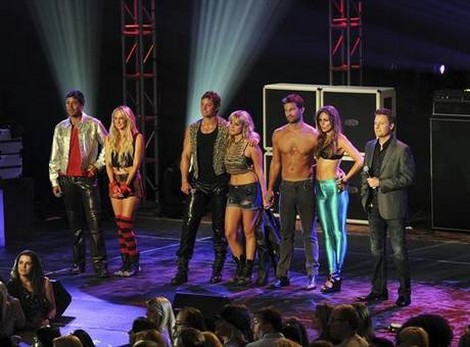 Night Ranger is an American rock band from San Francisco that gained popularity with power ballad, “Sister Christian” in the 1980’s.  The song is about original founder, Kelly Keagy‘s little sister, Christy, when he once gave some advice to her; it’s a true classic from the 1980’s.

Tonight on the Bachelor Pad, the final competition had the couples getting dressed up in 1980’s spandex and big hair to perform “Sister Christian” in front of 600 Night Ranger fans, live at the Paladium. The judges for the competition were the founding members of Night Ranger; Jack Blades, Kelly Keagy and Brad Gillis. The judges were looking for vocal ability, stage presence and chemistry.

The place was going wild, Nick and Rachel are up first and they do very well.

Jaclyn and Ed are next. They both forget the lyrics and ask to start over, it was awful. The band doesn’t hear them and just continues. Jaclyn tries some silly sexy dance, strips off some clothes which actually looked awkward and embarrassing, it was hard to watch. Jaclyn and Ed continue to dance together suggestively; Jaclyn lays down on the floor, then Ed jumps on top of her and starts dry humping her in front of everyone, the band was like, “Can they do that?.” If that wasn’t enough, they dance on over in front of the judges and Jaclyn jumps on top of Ed, wraps her legs around him and more dry humping. The judges looked embarrassed and angry at the outright disrespect their song was given in front of them and 600 fans.

When it was time for the judges to announce who won, they tell Jaclyn and Ed that they get a “worst performance”, Nick and Rachel win.

In the end, Ed and Jaclyn were sent home tonight and no doubt will go down in Bachelor Pad history as the most embarrassing and disrespectful players in the show’s history.