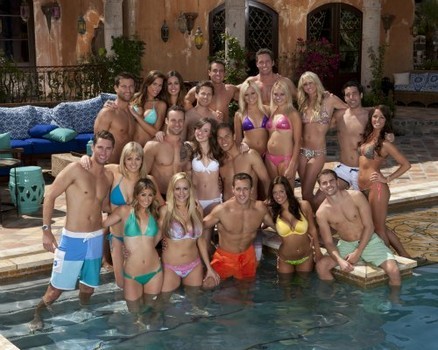 Last week’s Bachelor Pad certainly had it’s share of drama. Did you see the episode? If you missed any of it, you can read the full and detailed recap here.

Chris and Sarah were walking a find thread on Bachelor Pad, but last week they won the Spelling Bee competition and guaranteed themselves another week in the house. Now the finale is just around the corner and things are going to heat up in the house and I can’t wait to see what the final competitions are going to be.

Tonight a conflicted contestant has to choose between strategy and loyalty that could betray a best friend. There are two challenges, a sudden death dangling competition in which contestants have to depend on their partners being able to figure out some “Bachelor Pad Trivia” which will avoid them from being plummeted into the pool. The second is a karaoke competition which will be played out in front of 500 people at a Hollywood concert venue with a surprise guest, Night Ranger. Tonight’s roses are very important as the couple with the roses will decide who to take to the finals with them. Nick and Rachel are the winners of the singing competition and although they both disagree on who to take to the finals with them, in the end, they decide to take Chris and Sarah with them. Thank goodness Blakely will finally be sent home, she has to be one of the most annoying Bachelor Pad players.

If you are a person that doesn’t want to be spoiled, stop reading now.  If you’ve been watching the whole season, you won’t be surprised that Nick and Rachel gets most of the votes from their former house guests and have them winning the game. Nick and Rachel then have to make a tough decision on whether to “Keep” or “Share” the $250,000.00.

Now how this plays out is that if both decide to “Keep” the money, they get nothing and the rest of the cast splits the money. If they both “Share”, then they split the cash between the two of them. Now, in a worse case scenario for one of them, if one chooses to “Keep” and one chooses to “Share”, the person who chose “Keep”, keeps all the cash. Spoilers indicate that Nick chooses “Keep” and Rachel chooses “Share”, meaning that he walks away with all the cash. At this point it really sucks to be Rachel because she never had an alliance with Nick and he really doesn’t owe her anything.

The extended preview for the show is located here!