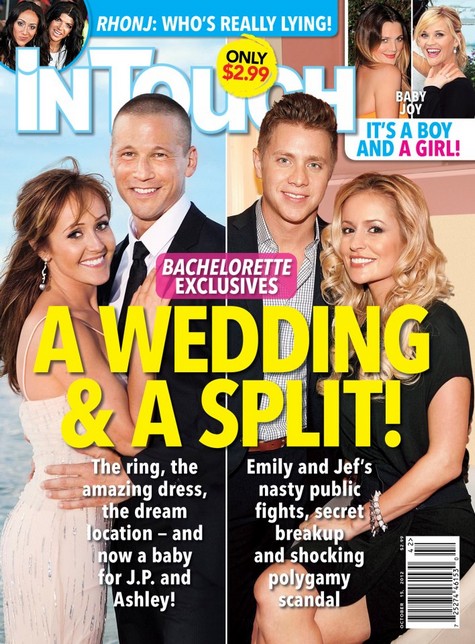 Did you know that Jef Holm had an observant Morman upbringing?  Well we didn’t either!  But The Bachelorette Emily Maynard definitely knew.  Of course nothing gets in Emily’s way when it comes to her famewhoring so why would this?  Mormons used to follow the practice of polygamy and some allegedly still do.  America got a nice introduction to some of the interesting wrinkles in the practice of some branches of The Church of Jesus Christ of Latter-day Saints on the amazing show Big Love.

This week’s cover of In Touch Weekly features the story ‘Bachelorette Exclusives: A Wedding & A Split’ and we learn that Jef’s family is lousy with polygamists!  But what does that really matter anyway since as we explained on Celeb Dirty Laundry Emily and Jef are only acting out a showmance and their engagement is totally phoney!  Can you see Emily as one of several wives?  Would she demand to be the first wife?

In Touch Weekly reveals some surprising secrets: Fans speculated about Bachelorette’s Jef Holm’s religious upbringing after the 28-year-old went an entire season on the hit show without highlighting his Mormon background. But while Jef claims he had no intention of hiding any part of his past, a family member reveals exclusively to In Touch that while his immediate family, who are Mormon, do not practice polygamy, many of his relatives — including aunts and uncles — are still followers of the FLDS Church, a sect of Mormonism that still practices polygamy.

In fact, In Touch can reveal that his uncle Rodney Holm was convicted of bigamy in 2003 and his grandfather Carl Holm had 11 wives — and helped establish the FLDS Church after the LDS suspended the practice of polygamy.

And while most people are shunned after leaving polygamy (as Jef’s father did), that’s not the case for the Holm’s — who still keep in touch with both sides of the divided family. “The Holm’s are the only ones that talk to other families after they leave the polygamy religion,” the family member says. “There’s a higher level of respect attached to the Holm family because of [the grandfather] helping found the church.”

We also learn on the cover of In Touch that real couple Ashley Hebert and J.P. Rosenbaum are ready to welcome a baby!  Their wedding plans are detailed in this week’s issue – we are promised to see the ring, the amazing dress, the dream location…  I can hardly wait to read all about it!

Also covered in this week’s issue will be insider details on The Real Housewives of New Jersey  – who is really lying?  Could it possibly be psycho Teresa Giudice?